While the randomized levels encourage constant deliberation over rote memorization, the decisions you make would not be nearly as compelling without Spelunky's remarkably dense emergent gameplay. Today I Die creator Daniel Benmergui says of the game, "It's what many people (including me!) wanted to do for a long time: set up basic navigation, encourage careful exploration over hoarding crap and add behavioral elements that produce emergent, ridiculous situations."

Consider the shopkeepers, for instance. Sprinkled throughout the game's 20 levels, shopkeepers offer everything from extra ropes to teleportation devices. Initially, you might assume these shopkeepers obey the single, illogical, unspoken rule of every videogame shopkeeper from The Legend of Zelda to Resident Evil 4: Despite the fact that you're a heavily armed hero and he's a business-minded entrepreneur, you can't steal from him.

In Spelunky, this assumption is wrong. Awesomely so.

You can not only grab any item in the store and run out with it, but doing so will cause the aggrieved merchant to pull out an instant-kill shotgun and chase you to the end of the level, firing wildly. If that's not enough, you can then kill the belligerent shopkeeper and take the shotgun for yourself. Of course, stealing from a merchant makes you a fugitive whose face adorns Wanted posters in every single shop you encounter until the end of the game. You'll be fired on instantly by every shopkeeper without hesitation; the merciless bastards even set traps for you near level exits to avenge their fallen comrade. What initially seemed a simple situation - buy from a shopkeeper or don't - suddenly turns into a multifaceted decision with wide-ranging consequences. Whether the second most powerful weapon in the game and a handful of booty is worth becoming a marked man is entirely up to you. 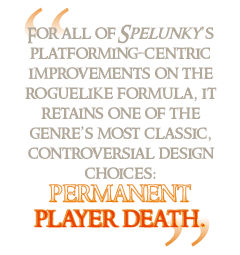 While Spelunky may not support quite as many emergent situations as a typical roguelike like NetHack, it gives you the freedom to express yourself through hundreds, if not thousands of emergent strategies without bewildering you through convoluted object relationships or a confusing interface. In a sense, Spelunky continually encourages the design ideal that Far Cry 2 Creative Director Clint Hocking calls "intentional play": Rather than simply progress through a game utilizing learned skills as necessary, you're able to plan and effect unique situations by using your imagination and a combination of the game's core mechanics. Countless sandbox games take pride in the amount of supposed freedom they offer, but very few actually encourage the degree of intentional play that Spelunky does in every session.

Granted, "encourage" may not be the correct word - perhaps it's better to say that Spelunky requires thoughtful, imaginative play. For all of Spelunky's platforming-centric improvements on the roguelike formula, it retains one of the genre's most classic, controversial design choices: permanent player death. There are no saves or extra lives in Spelunky, only four sets of five punishing levels.