Just as in classic roguelikes, Spelunky's rigid definition of death forces you to treat every playthrough with a degree of care and foresight unheard of in today's hand-holding, quicksave-heavy design landscape. Unlike classic roguelikes, however, it doesn't feel like Spelunky derives a sadistic pleasure out of killing players simply for stepping onto invisible trap doors or picking up arbitrarily cursed items. "The thing that Spelunky totally nails," says Braid creator Jonathan Blow, "is that whenever I die, there's a good probability it was in a ridiculous fashion, yet the game always feels fair."

A typical Spelunky playthrough lasts less than 15 minutes, encouraging constant replays. You'll likely die a hundred times before finally becoming skilled enough to complete the final level, and even that is being generous. Spelunky is an unforgiving, unapologetic game where you can go from having five full hearts to zero thanks to a mistimed jump, but you always feel responsible for your own failure. With every death, you learn something new, gradually building your knowledge on an ever-growing pile of adorable pixelated adventurer corpses. "What I am mostly awed at," Benmergui raves, "is the fact that you yourself are learning the survival skills the game needs ... each time I played I learned something new that piled up with my real experience, and allowed me to go a little further this time (provided I didn't make a stupid mistake). I didn't even realize I was developing these skills." 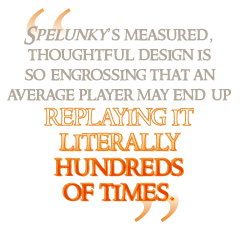 When you add up these three core design components - randomized platforming levels, emergent gameplay and permanent death - the result is far more than the sum of their parts. Nearly all aspects of Spelunky gracefully play off each other: The randomized levels make every play-through feel fresh, the high-stakes failure states make every level challenging and the elegant, interlacing gameplay mechanics allow you to overcome those challenges in innumerable different ways. In a world where games strive for replayability through unlockable content and higher difficulty modes, Spelunky's measured, thoughtful design is so engrossing that an average player may end up replaying it literally hundreds of times. ("I actually have it as an icon in my quick launch bar now," Blow confesses).

Where AAA games use bigger and bigger budgets to afford players more compelling choices, Derek Yu has singlehandedly created a game with more player agency than nearly every open-world RPG or sandbox title in recent memory. Where Fable II or Prince of Persia seek to make the act of play as consequence- and frustration-free as possible, Spelunky kills you thousands of times but keeps you coming back for more. It's imaginative, polished and addictive, and it's doing more to further the art of game design than most mainstream fare.

Oh, and did I mention it's free?

Anthony Burch produces the web series Hey Ash, Whatcha Playin, writes about videogame-to-film adaptations at AMC and is the features editor for Destructoid.com. He recently completed Runner, his first artgame.

Shut Up and Sit Down: Let's Play A Mega Game! - Saving the World from Alien Invasion Quinns 11 Comments
Comments on