"When making the game is more important than selling it, then you know you're actually creating an indie game. Which is one of the reasons why indies are such horrible business people."
-     Petri Purho, creator of Crayon Physics Deluxe

Making a career out of art is never an easy or straightforward task. For the growing movement of "indie" game developers, balancing creative experimentation with financial obligations is an all too common problem. In the end, each developer's attitude concerning the question of art versus commerce is as unique and varied as their games they create.

Of course, none of the conundrums faced by indie developers would exist without the proliferation of digital distribution services in the last few years, which has resulted in a huge and positive impact on sales for indie games. Steampunk puzzle game Cogs from Lazy 8 Studios launched on Valve's Steam download service in April, and Lazy 8 CEO Rob Jagnow states the game has sold around 2,200 copies in the last two months. Those sales have netted Jagnow's two-person operation about $15,400 after Valve's 30-percent cut of the profits. If (and it's a big "if") sales hold steady at 1,000 per month, Cogs could sell 12,000 copies in a year and earn Lazy 8 Studios around $84,000.

According to Jagnow, that kind of income simply wouldn't be possible with the old retail model available to indie game developers. "I've had publishers who wanted retail rights for Cogs tell me that I'd be lucky to get 50 cents from a $10 sale," he says. Retail publishers claim that store shelves act as advertisements and also reach an audience uncomfortable buying digital products, but for Jagnow, "the basic math is simple: If you think that for every 14 in-store purchases, one of those customers would be instead willing to buy online, then you're better off skipping the retail sales." 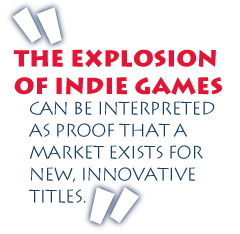 There's no doubt this growth in indie game sales has been encouraged by the special attention digital distribution services now pay to indie games. Steam has a separate "indie" section of 83 games (out of the entire service's 735) with most prices ranging between $4.99 and $19.99. Perhaps inspired by its own roots as an independent developer, Valve has been proactive in adding indie games to Steam, signing finalists from the Independent Games Festival including 2009's Seumas McNally Grand Prize winner Blueberry Garden, which was recently featured on Steam's main page. Steam competitor Direct2Drive is the official download sponsor of the IGF and offers a selection of 93 indie titles on its site. Sweden-based Paradox Entertainment's GamersGate sponsors the Swedish Indie Game Awards and lists its 11 indie games as a subsection of its "Casual" category. Developers told The Escapist these services offer comparable pricing and profit-sharing, plus the freedom to distribute their games on multiple services.

The explosion of indie games in the last few years - and the attention they're receiving from both the media and distributors - can be interpreted as proof that a market exists for new, innovative titles. Jonathan Mercier of Citérémis, whose Aztek-inspired RPG Aztaka launched in May, encapsulates those feelings: "The decisions made by the bigger companies have left a space for innovation and fresh ideas to blossom. As long as players are interested in new and innovative games, 'indie' or even the more forward-thinking of the large studios will have an audience and a chance to profit."