Four years ago, Greg Costikyan stood before a packed room at the Game Developers Conference and delivered a speech that earned a standing ovation. The industry veteran decried all that was wrong with the videogame establishment, calling for an end to developer crunch time and wondering why, two decades after the advent of Pole Position, developers were spending 80-hour weeks making essentially the same game. 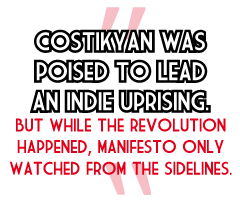 Those weren't empty words. A year later, Costikyan founded Manifesto Games, a distribution portal that proclaimed to host the kinds of ideas no one else would. Costikyan was poised to lead an indie uprising. But while the revolution happened, Manifesto only watched from the sidelines.

Costikyan is something of a legend in game design circles, having literally been around since before games were written in computer code. His ludography includes notable roleplaying games like the Paranoia series, but nowadays Costikyan is known as much for the fire he occasionally spits at the games industry as the work he's contributed to it. In 2000, he revealed himself as one of the anonymous authors of The Scratchware Manifesto, a rambling screed railing against the oppressive nature of AAA game development. Later, he penned a two-part series for The Escapist under the title "Death to the Games Industry (Long Live Games)."

Then, of course, there was his GDC rant from 2005. Here's my favorite part:

"My friends, we are fucked. We are well and truly fucked. The bar, in terms of graphics and glitz, has been raised and raised and raised until no one can any longer afford to risk anything at all. The sheer labor involved in creating a game has increased exponentially, until our only choice is permanent crunch and mandatory 80-hour weeks - at least until all our jobs are out-sourced to Asia. ... I say - enough. The time has come for revolution."

Understand that, at the time, indie gaming hadn't blown up yet. Steam and Xbox Live Arcade would only begin hosting independent games later that year. YouTube, which has since helped market countless indie creations, was just getting off the ground. Big Fish and PlayFirst were tapping the casual games market, but they weren't offering the innovation Costikyan sought. He saw both a problem and an opportunity, and out of that opportunity, Costikyan's own online game store was born.

Manifesto Games was supposed to fill the hardcore-indie niche, a difficult subset of tastes to pin down. The trick for Manifesto, Costikyan believed, was in the marketing. In a February 2006 conversation, he argued that few independent developers had the expertise to promote their material. Manifesto would put their work on an easily-accessible pedestal, essentially creating the market for them. Revolution would fall to the community, whose user reviews and recommendations would build the site.

Letters to the Editor: Declaration of Independence The Escapist Staff 2 Comments

Death to the Games Industry, Part I Greg Costikyan 11 Comments