In the battle for the time and attention of the gaming public, it's hard not to feel the odds are stacked against the little guys. While major publishers have multimillion-dollar budgets and teams of hundreds of developers at their disposal, indies have to settle for home equity loans and volunteer contributors to bring their ideas to fruition. But there's one area where indies have a natural advantage over the competition: Speed.

Without a budget to adhere to or a team of artists and programmers to keep firing on all cylinders, rapid prototyping - where a solo developer implements a series of gameplay concepts as quickly as possible - allows indies to dive headfirst into game design, uncovering unique mechanics and pushing the boundaries of their craft. Many of these designs will falter, and only a few will ever go on to provide the basis for a fully realized game. But who cares when you have so many new ideas to try out? 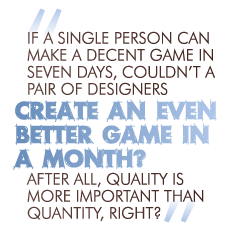 There's a simple question at the heart of rapid prototyping: Why restrict yourself so much when creating a game? If a single person can make a decent game in seven days, couldn't a pair of designers create an even better game in a month? After all, quality is more important than quantity, right?

That's the prevailing attitude in the game industry, and while it's helped produce a host of high-quality, highly ambitious titles, it may also be holding the medium back. As the stakes rise along with the technological, personnel and budgetary requirements of a project, publishers are less and less willing to take risks. When a single high-profile failure is enough to shutter a major studio, it's understandable that these companies would spend their resources creating games with a proven record of success, whether based on a familiar genre or on an existing IP.

That's well and good for a 100-person company, but the prospect of working on another cookie-cutter first-person shooter didn't hold much appeal for Kyle Gabler and Kyle Gray, two former students at Carnegie Mellon University's Entertainment Technology Center. Faced with the prospect of graduating into the soul-crushing world of AAA development, they opted to make the most of their last semester at the ETC by organizing the Experimental Gameplay Project. Together with fellow ETC grad students Shalin Shodhan and Matt Kucic, Gabler and Gray set out to create 50 fully playable prototypes over a fourteen-week period while adhering to three simple rules: 1) Each game must be made in seven days; 2) Each game must be made by exactly one person; and 3) Each game must be based around a common theme that varies week by week. As the team finished their weekly prototypes, they made them available for download from their website and let players rate them.

Letters to the Editor: Declaration of Independence The Escapist Staff 2 Comments

Alt+Escape: I Can Hold My Breath Forever John Funk 41 Comments
Comments on