I write this article - my first for The Escapist in over a year - with a troubled mind. Much has changed in the year since I last wrote about videogames, still more has changed in the more than five years since I first wrote about videogames and an infinite amount of change has swept the gaming landscape since I first picked up a controller almost 30 years ago. The games themselves - and the experience of playing them - have changed so radically it's shocking to those of us, the hardcore gamers, who at one point in time believed games would forever be considered our secret passion, unknown and unknowable to anyone not in the club. 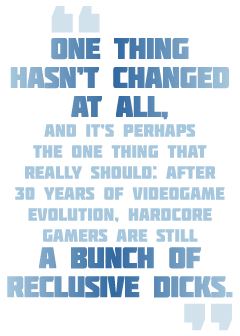 And yet, in the early days of The Escapist, that was our mission: to try to explain the secrets of The Secret. In fact, my very first article for The Escapist, written a few months before I became an editor, was an attempt to explain the disorientation of having grown up in a time when nuclear annihilation at the hands of the Russians seemed a near-certainty, and that only by exploring videogame simulations of the end of the world was I able to find some peace. It was a fairly rambling piece, and I'm not sure how well it actually accomplished The Mission, but I had to try.

In those days it was fairly common for an article in The Escapist to drag on for more than 3,000 words, and the website layout you enjoy today wasn't even a glint in anyone's eye. The new site bears little resemblance to the original, and the weekly magazine, while still very much alive, is surrounded by content the likes of which we couldn't have imagined in 2005. Now, four years after the founding of The Escapist and slightly more than three years after I was hired, I'm not just any editor, I'm the Editor-in-Chief, and our readership has grown by more than 600 percent.

Change, it seems, is everywhere. Yet it seems one thing hasn't changed at all, and it's perhaps the one thing that really should: After 30 years of videogame evolution, hardcore gamers are still a bunch of reclusive dicks.

Videogames have always been more than just another medium to the hardcore crowd. It's always been a core tenet of the hardcore gamer creed that videogames are our medium. At the risk of sounding trite, for those of us who grew up with more brains than brawn, videogames were an escape. Perhaps the ultimate escape. Sure, you could lose yourself in a book or occupy your mind with the mindless entertainment of cinema, but videogames have always been about more than either while combining the best effects of both. Videogames since day one have been immersive. And we, who discovered them first, have always believed that immersion was a sacred rite that we alone could experience.