I recently picked up To Tempt a Scotsman by Victoria Dahl, an up-and-coming U.S. romance writer. It has kilts. It has duels. It has a lot of women seducing men and men grabbing women. It has a Happily Ever After ending, apparently a key component of the romance formula. The whole thing is immensely silly, which shouldn't obscure the fact that a) Ms. Dahl is a superb writer, and b) Romance novels account for over 50 percent of paperback fiction sales in North America. 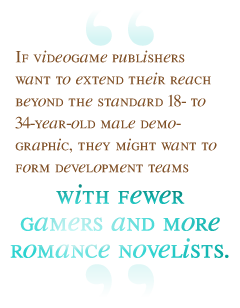 You read that right: over 50 percent. Romance quietly outsells nearly everything else in the Western book biz. People laugh at romance novels and the people who read them - not unlike the sneers many still direct at videogames and gamers. But along with the raw sales, consider the business model: Leading publisher Harlequin releases more than 120 titles per month, going for addictive quantity as a selling point. Many romance readers buy several books a week. Authors have rabid followings and hook fans with episodic series. Romance publishers are also leading the charge into e-books, adapting faster and more successfully than mainstream companies.

So you have high output with frequent, addictive variations on the same theme. You have episodic content. You have buyer lock-in. You have nimble adaptation to changing technology. Sound like the wet-dream fantasies of any industry we know? And to sweeten the deal, most romance readers are women. If videogame publishers want to extend their reach beyond the standard 18- to 34-year-old male demographic, they might want to form development teams with fewer gamers and more romance novelists.

Actually, they (sort of) already have - in Japan. Developers there have long injected strong romance elements into RPGs (Grandia), simulations (Harvest Moon), anime-related games and titles like those of the Angelique series. Many of these go well beyond the norms of "relationship stuff" in most Western games, and as with Japanese manga, their willingness to incorporate a diversity of genres attracts a wider audience to the medium.

The Japanese refusal to say that anything can't be in a videogame should be an example to Western developers. Mixing up the creative gene pool only helps gaming's evolution: Trying Weird Shit™ can be a great antidote to the waves of derivative titles that choke store shelves every sales season. The problem is that evolution's a cast-iron bitch to deal with in terms of risk management. Bringing in outside catalysts for change is great for an industry too used to navel-gazing, but the price for innovation can be high. New steps forward are often gained through expense and failure.