Revisit the crude progenitor of one of gaming's global mega-franchises, and you're left with feelings of nostalgia, fondness ... and bewilderment, too. 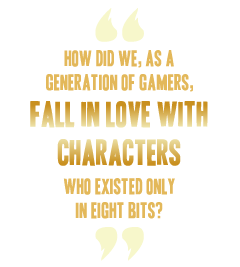 The elaborate production values, prolific marketing campaigns and blockbuster status of today's Street Fighter and Final Fantasy bear little resemblance to the winking-pixel simplicity of their earliest forebears. It's enough to make you wonder: How did we, as a generation of gamers, fall in love with characters who existed only in eight bits? How did we perceive such richness in an era where the idea of "narrative" seemed absurd? And how did we become immersed for life when game design was so simplistic, often brutally difficult and frequently counterintuitive?

Today's generation of '80s babies are fortunate to have shared a childhood with gaming - we grew up with them, and they with us. It's a strange inversion, in a way: Now that we're older, wiser and perhaps a bit more jaded, games have risen to the occasion, offering compelling characters, fleshed-out environments and engrossing stories to transport us to another world. But when gaming was at its most primitive, our imaginations were at their most active. And imagine we did; the characters of favorite Nintendo and Sega titles formed the substance of our playground games, the landscapes of our neighborhoods could be easily transmuted into vivid game worlds and we could be heroes alongside our friends. Had games been richer, more sophisticated and more complete in our youth, maybe there wouldn't have been so much space for us to fill in with our wishes and our dreams; had characters and stories been more defined, there may not have been room for us to define them ourselves.

Childhood games were often canny precursors to real products; in fact, Jeremy LaMont and his friends were playing Super Smash Bros. before it even existed. "We would choose teams of videogame characters, from the most iconic hero to the lowliest Goomba, and pit them against one another on the field of battle," he says. "In this bloodsport, winners were determined (as many little boys' playfights are) through debate. If you could cajole your opponent into conceding that Simon Belmont had whipped the fire flower away from Mario before he got it, touché. Luckily, Pidgey was there with a magic carpet to fly Mario to safety while the team regrouped."

Plenty of other players found room to expand on the slate of characters in games like Mega Man, including a young Anthony Neal, who made a hobby of inventing his own bosses. "I would draw them up, to the best my 7- or 8-year-old hands could muster, on sheets of notebook paper, along with their various powers and, of course, their weaknesses," he writes. His derivations - "Sword Man" and "Gun Man," among others - were not especially original, but one of the bosses he imagined is actually featured in Mega Man 9: Tornado Man. "Obviously I had no input or influence on MM9's villain whatsoever," says Neal. But the dichotomy between the result and his original vision stands out nonetheless: "Green is a horrible color for him, and he was a piece of cake to defeat," he gripes.

The Big Picture: In Defense of Nostalgia MovieBob 318 Comments

Escapist Podcast: 198: When Nostalgia Does And Doesn't Hold Up The Escapist Staff 1 Comment