But while tutorials have helped developers quickly and efficiently teach players the basics of their games, they have also decreased gamers' tolerance for in-depth instruction. These days, if a game has something to teach players before they can dive in, it had best be brief. A few easy missions at the start of a game or a 10-minute tutorial level might be palatable, but a series of training missions or a lengthy "Getting Started" section in a manual is pushing its luck. The unfortunate result is that it has become risky for games to contain complex controls or mechanics that can't be explained in a few minutes. 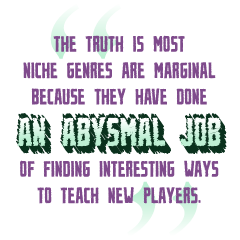 Starting in the last few years, tutorial sequences have been supplanted by tutorial games, where players derive much of the fun from the gradual introduction and application of game mechanics. Perhaps the best example of this trend is Valve Software's Portal, which spends approximately half the game introducing players to the mechanics and strategies they must employ during the game's post-Victory Incandescence finale. The "new mechanic -> application -> reward" formula that Portal uses is so immensely satisfying that players feel like they are picking apart brain teasers when they are actually following a rather thick trail of bread crumbs left by the designers.

PopCap has taken a similar approach with Peggle and Plants vs. Zombies. Each game gives players a steady drip-feed of new tools and challenges. The main game in a PopCap production - more like the first hit, really - is an extended tutorial that prepares players for other, more difficult game types. In Peggle, the adventure ends shortly after players unlock all the game's available characters; from there, they have the option to tackle Peggle's various challenge modes. Likewise, Plants vs. Zombies guides players through a very easy campaign that introduces new plants, zombies and maps at a slow, steady rate. Only after players complete the campaign do new, more difficult modes become available.

Even Creative Assembly borrowed a page from this book in Empire: Total War, where the game's "Road to Independence" campaign functions as its tutorial. It starts players with the basics of unit control, then, over the course of several hours, works them up to managing a large nation and major armies. Despite its utilitarian purpose, the "Road to Independence" campaign was well received by players and critics alike, and many Total War veterans spent their first days of Empire in its tutorial mode.

From these examples, it's reasonable to conclude that most gamers find learning far more entertaining than executing. Games that focus on execution risk frustrating players, because understanding a game mechanic isn't always enough. Players must be skilled at applying it, and skill takes time and patience. By contrast, learning is far easier, and the joy of discovery and the satisfaction of finally "getting it" are hard to resist.

This problem can either make for a dead-end or a way forward to a more interesting and diverse marketplace. While hardcore gamers of every stripe are quick to decry the stupefaction of videogames in the name of mass-market appeal, the truth is most niche genres are marginal because they have done an abysmal job of finding interesting ways to teach new players.