Even 15 years ago, Greg Costikyan singled out wargames as a quintessential example of bad tutorial design. In his article "I Have No Words and I Must Design," he writes:

I've had more than one conversation with a computer game designer in which he tells me about all the fascinating things his game simulates - while I sit there saying, "Really? What do you know. I didn't realize that." Say you've got a computer wargame in which weather affects movement and defense. If you don't tell the player that weather has an effect, what good is it? It won't affect the player's behavior; it won't affect his decisions. 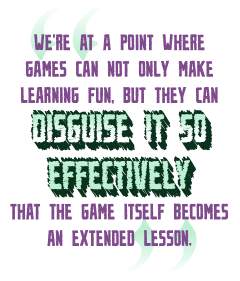 Unfortunately, this approach has become a fixture of the niche-genre landscape, which helps explain why such games have limited appeal. Players need to understand the rules of a game if they are to enjoy themselves. The alternative is a "black box" gaming experience, where players press buttons and stuff happens, but only the program and its designers actually understand the relationship between inputs and outputs. This is what Sid Meier warned against when he said the computer should never have more fun than the player. Elegant and sophisticated game systems are worthless unless people can appreciate them.

Simulations and sports games are similarly opaque. If you already understand both automotive engineering and professional racing, SimBin's GTR Evolution might make sense, but for most people it will be incomprehensible and frustrating. In GTR Evolution, players spend numberless hours adjusting and testing settings on their cars, but neither the game nor its manual attempts to explain how those settings affect the vehicles' handling. Even games we consider closer to the mainstream, like EA Sports titles, fall into the trap of designing for an audience that already knows how to play while leaving other users out. How many people, even among football fans, are able to utilize even half of the options that the Madden series puts at their disposal?

We're at a point where games can not only make learning fun, but they can disguise it so effectively that the game itself becomes an extended lesson. If more developers learn to break down complex mechanics into series of simple tasks while giving players a sense of progression, they could bring new audiences to niche genres without feeling compelled to dumb them down. After all, there's nothing wrong with developers teaching to the test when they're the ones who get the grade.