Some of my most vivid gaming memories are of Sierra's King's Quest, a title I haven't touched in nearly two decades. King's Quest was one of the first graphical adventure games of the early 1980s. In fact, it was one of the first games that I played that had any graphics at all, save for the odd bit of ASCII art. Though I've played hundreds of titles since then, I still remember that game. Most of all, I remember the goat. 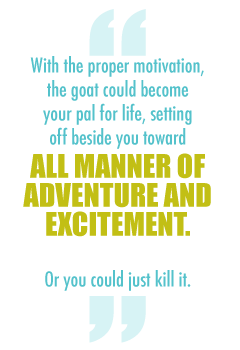 You encountered said goat fairly early in the game, penned up and minding its own business. It wandered around amiably and seemed genuinely happy - at least, as happy as goats get. If you took the time to pluck a carrot from a nearby vegetable patch, you could entice it with the promise of a crunchy snack. With the proper motivation, the goat could become your pal for life, setting off beside you toward all manner of adventure and excitement.

Or you could just kill it.

If you have a dagger, the command "kill goat," unsurprisingly, kills that goat dead. It lies there, a little splat of gray and red pixels, with the hilt of your dagger jutting out comically from its breast. You can't retrieve the dagger afterward, because, gross, it's in a goat. Like matter and antimatter, the goat and dagger come crashing together, resulting in mutual annihilation.

There is no sacrificing the goat to the gods or reading its entrails. Its death has absolutely no function in the game. This stands to reason, after all: Few things are less useful than a dead goat. Yet I distinctly remember killing it every time, if only because I could.

I meant well, of course. Each time I met that goat, I thought things would be different. We'd head out on our merry way, the road rising to meet us, the wind at our backs. For a while, we'd cut the perfect figure - a dapper young adventurer and his loyal, can-eating comrade. But then, inevitably, the rift would begin.

Though King's Quest had graphics, most actions were still governed by the clunky parsing software of early text games like Adventure and Zork, which broke commands down into simple verb-noun units. This did the job most of the time - until you steered off script, at which point it became maddening. Perhaps I'd come across a large stone. "Take Stone," I'd command. "I don't know what you mean by 'stone,'" the game would respond. I'd try again. "Get Rock." "You can't get the rock," the game would reply with the icy courtesy of Hal 9000. I can't let you do that, Dave.