There I'd stand, poised at the brink of a syntactic abyss. And maybe I couldn't "take stone." OK. Maybe I wasn't able to "get rock." Fine. But you know what I could do? I could "kill goat." It wasn't out of spite; on the contrary, there was nothing malicious about it. I did it simply because I could - or, more accurately, because I couldn't do anything else. Inevitably I would reach a point where all other options were exhausted. It was either "kill goat" or do nothing at all. 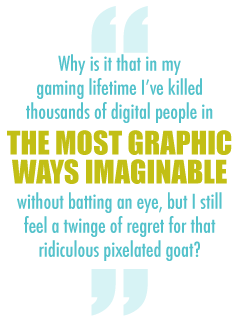 Time after time, that brave goat took one for the team, dying for my gaming sins. Immediately I'd feel terrible. After all, I'd reason, it would still be alive if I was only a little better at the game. I'd resolve to swear off the sordid business of capricide altogether. Telling myself that this time would be different, I'd start a new game, pick a new carrot and introduce myself to another doomed goat.

Though all of this happened years ago, it remains fresh in my mind. That's impressive in itself: Why is it that in my gaming lifetime I've killed thousands of digital people in the most graphic ways imaginable without batting an eye, but I still feel a twinge of regret for that ridiculous pixelated goat?

It wasn't as though the game itself cared one way or another. King's Quest is passive about the whole affair, almost indifferent. A quick glance at a FAQ tells me that killing the goat costs you five points, which is the same amount you get for partying up with it in the first place. From a strictly mathematical perspective, it comes out even; you could keep playing and easily forget the whole thing. Maybe that's why I didn't.

Of course, at the heart of the matter, there's something ludicrous about getting worked up at all. I've been talking about the goat as if it was real and had feelings. Obviously it wasn't and didn't. There is no goat, in the same way that for René Magritte, a painting of a pipe "is not a pipe." This has all the makings of a Zen koan: "When is a goat not a goat?"

Perhaps when it's a symbol. In the real world, my goat-killing antics would brand me a criminal and a deviant. But real-world morality has little weight in a virtual space. A heinous crime in reality is a simple command line in the other. I wasn't slaughtering hollow-horned mammals in my journeys through King's Quest - the daggers and goats were ciphers, devoid of value or meaning. But rather than taking comfort in a world of empty signifiers, I became uneasy. Insulated from societal norms, I found myself alone with the goat and my thoughts.

The Escapist Presents: 10 Goofy Goat Things to Do In Goat Simulator WMDogma 21 Comments