I had cut down thousands of enemies in pursuit of other, similarly meaningless objectives, I reasoned. What's a goat compared to a sewerful of flattened Goomba carcasses? But the goat stared back at me, its single-pixel eye unblinking. Goombas were meant to be stomped on - after fulfilling their purpose, they flicker and disappear. The goat, on the other hand, didn't seem to be designed with any purpose at all. Kill it, and it simply lays there, a grisly monument to senseless aggression. For the goat, there are no respawn points. Death is uncomfortably permanent. 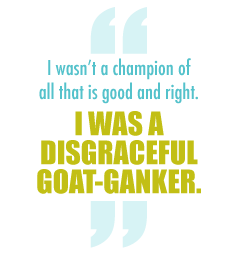 Somehow it was even worse that I was murdering a defenseless goat rather than another person. Animals are powerful symbols, serving as allegory for our own best and worst behavior. It's for this exact reason that Aesop told the fable of "The Tortoise and The Hare" rather than "The Really Slow Guy Who Stuck to His Guns and The Guy Who Was Really Fast but Lazy and Kind of a Jerk." These cases tap into a cache of emotions in their immediacy, but can lead us to ethical ambiguity: how "Eight Dead in Crash," is a statistic but "Goat Stabbed by Man" is a tragedy.

Even as a handful of pixels, that digital goat still managed to convey something - some essential bit of goat-osity. It was stubborn. Tough. Maybe lacking in the brains department. It would have got along just fine without me - so in taking up with it, the very nature of the game changed. My attitude toward the goat became intertwined with the way I perceived my character. In killing it, I didn't just destroy the goat - I destroyed the façade of heroism I had erected around myself. I wasn't a champion of all that was good and right. I was a disgraceful goat-ganker.

That goat is set apart from all the faceless enemies I've encountered in countless other games. It does not belong with the scores of passers-by I've mown down, or the hundreds of zombies I've ripped through. It is a symbol of guilt - a moment when I was given a chance to be patient and humane, but settled for the cheap thrill instead.

If I were to hammer out my own Aesopian maxim from this whole goat thing, it would be that the only true "morality games" are the ones we play against ourselves. Even in leisure we find opportunities to examine how we live, sometimes in the oddest of places. We are given a chance to notice the difference between the way we think we will act and the way we actually do. There is an old proverb that says "If all you have is a hammer, everything looks like a nail." In my case, when all I had was a dagger, everything looked like a goat.

Brendan Main lives in the frosty reaches of Canada. He studies videogames, grows tomatoes and plays the accordion, in increasing order of eccentricity. When not killing defenseless goats, he blogs at www.kingandrook.com .

Letters to the Editor: Digital Doggie Biscuit The Escapist Staff 0 Comments
Comments on