Nobody foresees the complications. The dining room has become a makeshift operating theater, complete with surgical table and anxious spectators.

Dad calls for pliers, a screwdriver, scissors and a straight razor. I leave to gather the tools as he struggles with the clamshell casing. When I return from the garage, the family - Dad, Mom and my brothers Bill and Joey - are huddling around the table. Joey, sitting with his cast-bound leg propped on a stool, squirms for a better view.

My father's dexterity amazes me. His mammoth hands work the battery into the small yellow patient. Grinning triumphantly, he screws on the lid. Every victory over technology is a major feat for my father, and he visibly enjoys them. He presents the gift to my little brother Joey, who smiles as he powers up his new Pikachu Tamagotchi, a gift guaranteed to keep him amused and happy as his leg heals over the next three months. Joey's smile fades as the little yellow bastard waves hello, somersaults and promptly falls over dead. 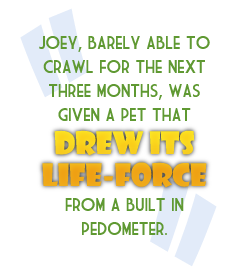 I take point. I was reading the instruction manual as my dad worked, so I already know what's wrong. Swooping up the tiny electro-mouse and cupping him between my hands, I attempt to resuscitate him by shaking him like a maraca until my arms cramp. I hold the Tamagotchi in my fist not knowing if it is alive or dead. Schrödinger's Pikachu.

I present the digital pet. Tension seeps out of the room and relief rushes in. The LCD shows a Pikachu sitting on his haunches, happily munching away on a Pokétreat. It is alive.

Had Mom read the packaging when she purchased the gift, she would have learned that this Pikachu needed to be "walked" to survive. Joey, barely able to crawl for the next three months, was given a pet that drew its life-force from a built in pedometer.

It started with a child's mistake: My little brother had taken a bad spill on his bicycle while attempting the 5-year-old equivalent of off-roading. The retention ditch behind our home was a steep but safe place for the kids to bike. Though it had drained after a thunderstorm the previous week, the grass was still soggy and didn't provide good traction. Joey's bike skidded, skipped and tossed him on a half-buried rock. He wound up with three minor breaks and a small plate in his leg (which he may still not know about).

The Sears boys aren't a rowdy bunch; we're just clumsy and frequently wind up broken and bruised. Whenever one of us is hurt, Mom or Dad shows up with something to lift our spirits. We injure ourselves so frequently we've begun to dream about the treats before we even see the doctor.