Though they're almost as old as home consoles themselves, pet simulators have rarely explored their full potential. Some work well on a mechanical level, like the NES's A Boy and His Blob, which has players solve puzzles by exploiting their gelatinous companion's shape-shifting abilities. Other games, like those of the Nintendogs franchise, focus on the day-to-day care of a pet. But whether the final goal is conquering a complex puzzle or raising an animal into a prize-winning paragon, videogames generally make no attempt to explore the emotional side of such relationships. 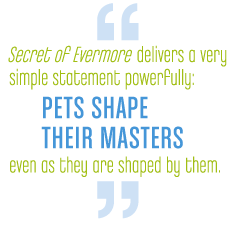 Perhaps that's why a 14-year-old relic named Secret of Evermore is quite possibly still the benchmark for games that wish to capture the bond between humans and their animal companions. Evermore's teenage protagonist and his dog look out for each other and never abandon one other, no matter what the boy's pragmatism might suggest or what the dog's instincts compel him to do. By stressing the equality of pet and human and encouraging both parties to rely on one another, the game delivers a very simple statement in a powerful way: Pets shape their masters even as they are shaped by them.

Evermore's narrative highlights this theme of mutual reliance. The game tells its story almost solely through the interaction between the boy and his dog. It is the dog's curiosity that propels the two protagonists into the world of Evermore and the boy's concern for the dog which provides a reason to explore. At no point does either hero place his own wellbeing ahead of his friend's; whenever separated, their top priority is reuniting with each other rather than trying to escape on their own. Most crucially, they are not compelled to act because the fate of the world rests in their hands, but rather because of their love for each other.

In one particularly striking scene that suggests the real world legends of dogs that travel vast distances in search of their master, the boy crosses an entire desert on a vague rumor pointing to his friend. During his journey the game intermittently cuts to his dog, who is trying to escape a palace in order to reunite with his friend. Though a larger plot develops around this scene, the game devotes more time to the juxtaposition between the boy and his dog as they each make sacrifices to rejoin one another.

Gallery of the Day: 8 Cartoonish Pets You Wish You Had DrStrangelove 6 Comments
Comments on