For years, it's been the dream of gamers and game makers alike: a direct pipeline between players and developers where you can have the latest PC title on your desktop mere moments after it launches. Now, thanks to digital distribution, it's a reality. Platforms like Sweden-based GamersGate have become an integral part of the way we consume games, allowing players to expand their game libraries without leaving the house and giving both large and small developers access to a new audience of consumers. 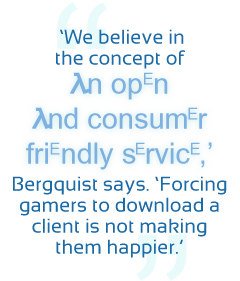 GamersGate began as little more than an experiment for developer Paradox Interactive. "We had a lot of customers approaching us telling us they could not find our games in the stores," explains Theo Bergquist, CEO of GamersGate. "And then one day a guy from Argentina asked us if he could download a game instead of us sending him a box. We let him do that, and the news spread fast on our forums. Suddenly we got a lot of inquiries about others who wanted to do the same thing."

Initially branded as "Paradox on Demand," the web-based service focused on bringing Paradox's titles to an audience that wouldn't otherwise have access to them. But it wasn't long before third-party publishers started calling Bergquist to ask if Paradox wouldn't mind selling their games in addition to Paradox's first-party software. Obviously, the old moniker was no longer suitable, and GamersGate was born.

The decision to start distributing games online has led to some impressive numbers for the company. "We've had 100-percent growth last year, and 100-percent growth this year," Bergquist proclaims happily. GamersGate isn't alone in this success, and other game retailers are taking note. "Publishers get almost twice the revenue from a game sold online," Bergquist notes. He even predicts that "within two to three years, I think more than 50 percent of all distribution will be online."

Bergquist believes a key aspect of his company's success has been the ease with which players can purchase and access games through the service. GamersGate is fully browser-based, meaning players don't need to install any additional software onto their computers before they can begin buying and playing games. "We believe in the concept of an open and consumer friendly service," Bergquist says. "Forcing gamers to download a client is not making them happier."

This user-friendly approach extends to GamersGate's account management policies as well. Unlike platforms like Steam, GamersGate allows players to transfer games between accounts at any point in time, ensuring that they always have access to the products they have purchased. "For us, it's all about anywhere, any time," Bergquist explains. "We want gamers to access the games wherever they are, and we trust them." Though this policy opens the door for unscrupulous players to abuse the system, it's a source of comfort for the service's customers.

Letters to the Editor: Alternative Access The Escapist Staff 2 Comments