The business of selling videogames used to be pretty simple: A wholesaler sells a game to a store. The store sells the game to a consumer. The consumer plays the game. 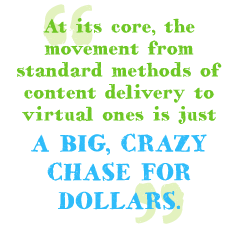 Today, we're in a new era. Hundreds of millions of gaming consoles and PCs with ever-growing amounts of storage space are now equipped with high-speed internet connections, allowing gamers to quickly and easily access new content directly from the source without venturing outside the living room.

PC gamers have long been downloading full, brand-new games from Steam and other sources, and console gamers are following suit. On August 11, Microsoft will launch its Games on Demand service, offering more than 30 full Xbox 360 titles for sale by download. Sony's PlayStation Network, for its part, offers a handful of otherwise disc-based PS3 games for download, including Burnout Paradise, Warhawk and Gran Turismo 5 Prologue. It's no stretch of the imagination to see that these are baby steps towards brand-new, full-featured games being delivered via direct download.

The videogame industry is also in the early stages of developing cloud-based business models where all the game content and computing power is remotely accessed from a far-off data center - just log in and play, no disk or massive download required.

Accessing content online has some benefits for gamers. It's incredibly convenient. We can receive patches to update our games, download expansion packs and even purchase some games without leaving the couch. We can also download demos to try out new titles, something I wish I had 20 years ago before I bought garbage like Friday the 13th for the NES. But if you care about things like games staying affordable and having some choice as a consumer, you might want to start worrying right about now.

At its core, the movement from standard methods of content delivery to virtual ones is just a big, crazy chase for dollars. This shift will have a major impact on the whole supply chain from console-makers to software publishers and retailers.

Taking a look at GameStop's SEC reports gives us a glimpse into some of the industry's inner workings at the retail level. The company's financial statements indicate that the markup on a new title is somewhere in the neighborhood of 20 percent, or about $10 for a game retailing at $60.

These markups represent dollars that software publishers would love to have for themselves. Wouldn't it be great for Activision if it could keep the whole $59.99 for a brand-new Xbox 360 or PS3 title instead of sharing it with a retailer? Just a few dollars multiplied by millions of units adds up to a pretty nice chunk of change. If the middle man is making money you want, you take him out.