In the war for the hearts and minds of videogame enthusiasts, Sony and Microsoft have increasingly turned their attention to the battleground of online services. The stakes are high. It's becoming clear as this console generation ages that the two companies will come to be defined less by their hardware than by their software; i.e. the experiences they provide users via Xbox Live and the PlayStation Network. Whatever the eventual reality may be for digital distribution, cloud gaming or even the next Sony or Microsoft consoles, these companies' brand images will largely be represented by their online platforms. 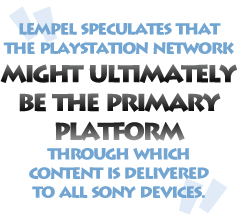 The Escapist recently spoke with Eric Lempel, Director of PlayStation Network Operations, and Scott Austin, Director of Digitally Distributed Games at Microsoft. Through talking to these two generals, it became clear that the founding principles and guiding vision for both services are defined as much by the backgrounds of each company as they are by what gamers actually demand.

At the outset of this generation, the Xbox 360 and the PS3 were both positioned not as mere game machines but as the centers of a digitally connected home entertainment network. Both companies invested in new HD formats to succeed the DVD, Sony had launched its PSP which was interoperable with the PS3 and Microsoft had nothing less than the entirety of the PC market at its disposal, allowing users to create a home multimedia network with the 360 as its beating heart. Sony's Lempel acknowledges that fulfilling the PS3's vision as a media hub was an early motivation behind the PlayStation Network: "This was absolutely a major goal and remains one with things like our videos, music player and photo display." It's a sensible philosophy given Sony's success in the HD format war, the multimedia empire under its umbrella and its extensive background in consumer electronics.

Talking with Lempel is an education in the different facets that comprise the PlayStation Network, and perhaps the philosophy of Sony as a whole. Games are an important aspect of the service, but Lempel is always quick to bring the discussion back to the myriad other multimedia features users can access through the PlayStation Network. This includes features like streaming content from the PS3 and basic media management services like music downloads and photo viewers. If, at times, the exact focus of the PlayStation Network seems muddled, it might be because the updates and features associated with it often cast an eye toward possible futures - including taking advantage of the entirety of Sony's consumer electronics division and becoming a multimedia access point unbound from the PS3 - rather than the present use to which users may want to put it. Sony's CEO, Howard Stringer, actually said as much in a May interview with Nikkei Electronics Asia: "Next we will be expanding the PlayStation Network to hardware other than the PS3, because the number of PS3 units sold puts a limit on the scale of the network possible." Lempel speculates that the PlayStation Network might ultimately be the primary platform through which content is delivered to all Sony devices. And considering the vast amount of content Sony represents, through its various television, film and videogame studios, it's clear this is a significantly advantageous strategy.