I didn't have much in common with my fellow recruits. There were computer scientists and programmers, a charming handful of intense Hot Topic-styled anime fans and a surprisingly large number of ex-military. Then there was me, a graphic designer and journalist who played primarily single-player console games. We were a ragtag crew united by a common purpose: to work at a genuine mainstream game studio. We would be CSRs (customer service representatives), invisible, floating beings of power who kept the peace and righted the wrongs in a digital world. Like the Avengers wrapped in the Justice League with a dash of the A-Team. Best of all, we would be getting EA checks and benefits for what boiled down to constructively using cheat codes. 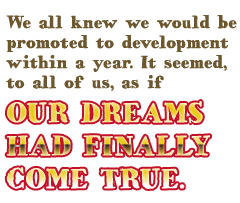 The Day of Reckoning

The start of open beta came faster than anyone expected. Someone flipped a switch, and instantly these digital worlds became populated. Tens of thousands streamed across Altdorf and The Blighted Isle, with Bright Wizards setting things on fire and Greenskins looking for things to smash or cover with filth.

While we weren't the designers that personally breathed life into all the quest-givers and monsters, we still felt like we were a part of something truly impressive. It was their baby, but we were charged with taking care of it. To the players, we represented the developers and the company as a whole. To the development team, we represented the interests of the players. It was like being a UN peacekeeper, caught between the powerful warlords and the huddled, unwashed masses.

As the game went into full commercial release, the entire building celebrated. The reviews were almost universally favorable, and after earning "Most Anticipated MMO" and "Best of E3" accolades from various publications, our pre-order numbers were well beyond expectations. My fellow CSRs speculated about how we would handle all the customers with just this one enormous room of people. Maybe we would get our own floor? Our own building? An office park?

Everything was perfect; we all knew we would be promoted to development within a year. I would be scripting quest chains and have my own toy-filled cubicle on one of the cool floors. It seemed, to all of us, as if our dreams had finally come true.

This is where the villain of our story comes in. Enter the Lich King. Our release date put Warhammer Online: Age of Reckoning on store shelves about two months before the long-awaited expansion to WoW, the biggest, most popular MMOG of all time. My coworkers, many of whom were loyal, max-level Blizzard fans, assured me that it wasn't a big deal. They acted as though gamers had room in their hearts and on their hard drives for two Orcs-and-Elves fantasy MMOGs with roughly the same gameplay. The people around me spoke with such optimism and confidence that I assumed they knew what they were talking about. I was a console gamer; what did I know?