That optimism made for a great work environment. Huge groups of us ate lunch together. People spent their breaks playing Rock Band in the console-filled breakrooms. Someone would shout some Simpsons quote or reference a bizarre internet meme and everyone would laugh. We all shared the same interests, and the atmosphere was so positive and safe that everyone felt like these were the people they were going to be with for a long, long time. Many of them were wrong. 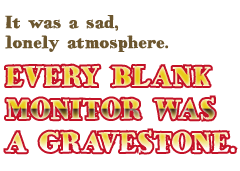 The news started coming through the usual channels - gaming blogs, rumor sites - that EA was losing money and layoffs were inevitable. Not because of us, however; we were still way in the black. With well over a million pre-orders alone, everyone who bought the game would theoretically shell out at least a couple months' worth of subscription fees. At Mythic there were catered lunches, launch parties and logo-stamped mugs and t-shirts for the whole staff. Nobody seemed worried. EA might have been in trouble, but here, at Mythic, we were safe.

Way Too Much Corn

By December, paid subscriber numbers for WAR had dropped from a reported 800,000 to fewer than 300,000. We quickly learned we weren't immune to EA's company-wide layoffs as two rounds hit my department and familiar faces disappeared.

The first to go weren't surprises. CSRs that were less adept with the software and less able to deal with customers stopped showing up. It was the third wave that had most people updating their resumes. People who had become our friends and mentors - guys whom we would all ask for advice or help with difficult issues - got cut. It became obvious that nobody was safe. The party was over.

Our department became more spread out as our neighbors were sent home. Most of us avoided speaking with our former coworkers lest we remind them of what they lost or remind ourselves of what was coming. It was a sad, lonely atmosphere. Every blank monitor was a gravestone.

At Christmas, the company provided a catered meal for the CSRs who had to monitor an in-game event and work through the holiday. I don't know if our bosses just ordered what they usually did, but the surplus of food made it seem like our department's slow decline had gone unnoticed. There was enough food for an army, but only a handful of us were left. For weeks afterward, the break room fridge overflowed with unopened trays of leftover corn. It felt like an offering left to appease the layoff god. Maybe this delicious corn would sate his mighty hunger.