Unlike most games, life doesn't have a pause button. We're constantly traveling forward through time whether we like it or not. And with advancing age comes a creeping personal inflexibility, a calcification of body and soul, a curdling belief that the world is failing to live up to its end of the bargain. If you're a noir detective, this would come across as a seductive world-weariness. In real life, it's more like plain grouchiness. The thrill is gone. 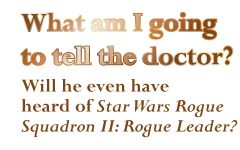 As is the case with many people dragged callously into their 30s by the implacable march of time, videogames remain a significant part of my life. But even as I propel the latest meathead avatar through the aftermath of yet another apocalyptic event on Planet Beige - hands loosely cradling the controller, fingers working from muscle memory alone, eyes coolly processing on-screen information like an airline pilot mid-flight - there's a gnawing sense that here in 2009, I'm just going through the motions. I still play videogames because, y'know, I like 'em. I'm that guy who likes videogames. But hang on - didn't I used to love videogames? When did I wander off the shining path?

With apologies to F. Scott Fitzgerald and David Fincher, I decided to follow the example of Benjamin Button and relive my gaming life backwards. Think of it as a walkthrough in reverse: By casting around for some of my most intense videogame-related memories, I'll remember what made those experiences so formative and rekindle my once-pure love. I hope.

There's only one other person in the waiting room, and they don't even look ill, so it'll probably be my turn soon. I shift my weight onto the other buttock. These chairs are too hard. Is it too much to hope the problem has gone away by itself? I gingerly close my eyes. Instead of the usual reddish black void, there's a disorienting sensation of forward movement, like I'm riding a ghostly, amniotic rollercoaster. I open my eyes again and the waiting room warps. So it's definitely still there, then. What am I going to tell the doctor? Will he even have heard of Star Wars Rogue Squadron II: Rogue Leader?

Well, doc, it's like this: I recently bought a Nintendo GameCube ... I know, I know, I'm too old for videogames. To be honest, I'd given them up for a few years. But I played this one game in the store and I ... I had to own it. It was like someone had finally built the Star Wars experience my 9-year-old self had daydreamed about. So I used the money from my grown-up, nine-to-five job to buy a silly, plasticky GameCube. And once I got it home, I couldn't stop playing it. I've flown hundreds of missions, won a thousand zero-gravity dogfights and defeated the Empire countless times. The rush of piloting an X-Wing - the vivid sights, the transportive sounds - is narcotic. I feel like I was destined to do this.