But now the game is locked in my head, doc. The starfield - that endless, scrolling starfield, a blank, black canvas illuminated by laser bolts and proton torpedoes - is imprinted on my brainpan like a broken screensaver. Even when I close my eyes, it's there, pulling me forward past constellations of imaginary stars. I can't sleep, I can't work, I can't do anything. You've got to do something, doc. You've got to give me something to make it stop. I'm starting to get really scared ... 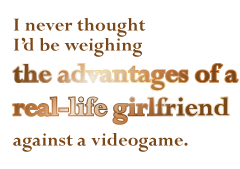 The receptionist sticks her head around the waiting room door. "Mr Virtue?"

... scared that I'll never be able to play the game again.

Juggling two women is harder than I thought it would be. But that's the point of college, right? To experiment, try new things? I just never expected to fall for them both. One of them drinks, wears black PVC trousers and smokes Lucky Strike cigarettes. She looks pretty severe, but I can make her laugh. The other is a fitness fanatic, wears the most impractical tight shorts and dual-wields pistols. She does whatever I tell her, even when it's quite obviously the wrong thing to do.

I like to go out and hit the bars and clubs with Miss Lucky Strike. See and be seen, be an ace face on campus. But I also like to schedule the odd night in with Miss Tight Shorts, the better to figure out how the hell to get through the Sanctuary Of The Scion level. It's weird - I never thought I'd be weighing the advantages of a real-life girlfriend against a videogame. What would my 9-year-old geek self think? I guess he'd be too busy playing games on that busted-up old Spectrum with the rubber keys, waiting for those goddamn tapes to load. My dorm-mate's PlayStation is fast and smooth. And it plays CDs, too.

Don't get me wrong: I like drinking and chaos, girls and loud music, dancing and oblivion. But I treasure those times when it's just Lara and me, sealed together in a silent tomb, padding across sand and stone trying to suss out the right way forward. I'd pretty much given up on games since I came to college - home computers should be left at home. But this woman has got her hooks into me. My dorm-mate is starting to grumble at how much time we spend together. And my next student loan is due soon. Maybe I should earmark some of that dough for my very own PlayStation. Just for a little while ... just until things are over between Lara and me.