Today the teacher said we had to write a story about someone who was our hero and my hero is Monty Mole who stars in the Spectrum 48k computer game Monty Mole On The Run. Monty is a white mole who does not live under the ground he lives in a house but it is not a safe house because there are baddies there who want to stop Monty going on holiday. I have to help Monty pick up all the things he needs to go on holiday and they are things like cake and money and medicine. (Don't pick up the dynamite, if you pick up the dynamite Monty explodes!) 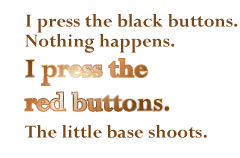 I like Monty because he is brave. The game is very hard but it is my favorite game and I have 32 games for my Spectrum 48k. The only thing I do not like about Monty Mole On The Run is that it takes 10 minutes to load on tape and sometimes it does not work and you have to start again. Most nights my mum says I have to stop because I have been playing Monty Mole too long. My friend Craig says that Monty can get a jetpack but I have never seen a jetpack. Monty does not speak but if he did I think he would say "Try again, Graeme!" I also like the music at the start.

The Year It All Began

Grandfather's house. Alone. Watching videos on the big telly. The American man loves the nurse and cries when he turns into a wolf. Lying on the carpet, close to the screen. Rolling over so the picture's upside down, waiting for the bad soldiers and Kermit the Frog. Uncle comes in. Uncle stops the video. The telly picture flickers. The telly picture goes black.

"Use this," says Uncle, pushing the stick at the top of the box. The base floats across screen. I look at the stick. The stick flies the base. I am the base. Red buttons shoot. I must shoot the spaceships.

"Yes," I say, scraping forward on my knees, closer to the screen. "YES!"

Graeme Virtue is a freelance writer based in Scotland. You can attempt to follow his spicy eating habits at Trampy And The Tramp's Glasgow Of Curry.

Letters to the Editor: A Wrinkle in Time The Escapist Staff 0 Comments
Comments on