Ever see the movie? I'm sure you've at least heard the premise: Phil, a weatherman, is sent to Punxsutawney to report on the groundhog, but inexplicably gets stuck in a temporal loop such that he wakes up every morning in the same day - February 2nd - forced to repeatedly experience the same events. It's pretty good. Quite funny. And it's the definitive movie on replay. 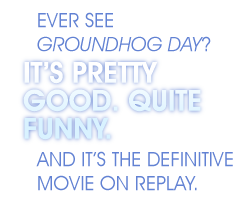 But here's the thing: Groundhog Day presents this temporal loop as the movie's "problem" - Phil's goal is to escape this loop, to finally make it to February 3rd. Yet at the same time, this loop is the very pleasure of the movie. Although we do hope that Phil escapes eventually, much of his predicament seems strangely enviable: being able to do anything he wants and knowing that he doesn't have to live with the consequences; learning to anticipate exactly what will happen and planning accordingly; experimenting with possibilities, trying different strategies and learning the best way to navigate this particular day. February 2 in Punxsutawney becomes the ultimate videogame level - Phil replays the day over and over, learning new tactics and acquiring new skills until he can successfully defeat the final boss: romancing his producer.

Groundhog Day taps into a very basic yearning, one most commonly annunciated as "if I knew then what I know now." It's this same pleasure that videogames afford in replayability. Replay satisfies the eternal human desire to go back and do things over, to experience a situation in the present but also with the benefit of hindsight. We all want chances to relive a moment, to erase our mistakes and do things better, and replay allows this.

I kick open the red door, charge ahead, slide beneath the pipes and break for the stairs ahead. I scuffle with a blue on the floor above, then ... uh-oh, no good. Rewind.

When videogames began introducing the "save game" feature, we originally thought of this in relation to the expanding size of games - save points allowed us to stop playing and come back later, which in turn freed up designers to create experiences that lasted for hours rather than minutes. But this innovation had another profound effect on the way we experienced games.

In the past, dying had been something to avoid at all costs, as it inevitably entailed some punishment - going back to the beginning of a level, or worse, having to start the whole game over from scratch. These were very game-like experiences, as they entailed a sense of losing - death made us slouch back, throw our arms in the air and take a breather before starting over again. But as games have become more story driven - which is to say, more movie-like - "losing" has been replaced with "rewinding." Death is now more of a hiccup, a mistake that needn't be feared as it can be easily forgotten. Whereas dying used to require a reboot of sorts - the level resets, and the player must start over from scratch - we now simply turn back the clock and try that moment again.

I kick open the door, slide beneath the pipes, break for the stairs, ignore the blue, charge down the ramp ahead, turn right - no, make that left ... forget it. Rewind.

Letters to the Editor: A Wrinkle in Time The Escapist Staff 0 Comments
Comments on