The "story" of Mirror's Edge involves Faith attempting to uncover a vast conspiracy and clear her sister's name of a crime. Yet what I actually experience is Faith repeatedly dying and resurrecting en route to her goal, continually being defeated, then moving backward in time to a slightly earlier moment. While playing, I constantly have my finger on the rewind button, turning back the story to watch that scene over, hoping for a different outcome the next time around. 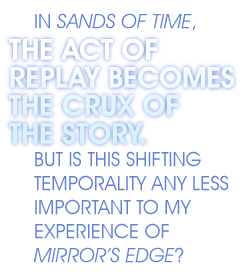 Think about it: We're living in a home video era. Since the dawn of the VCR, we've had complete temporal control over the stories we experience on screen. We can pause when we need a drink or rewind when we miss a vital line of dialogue. For better or worse, we're accustomed to temporally manipulating our narrative experiences, and replay has evolved alongside this standard.

I kick open the door, slide beneath the pipes, break for the stairs, ignore the blue, charge down the ramp, turn left, duck behind a cargo truck and spot an elevator on the opposite side of a glass wall. Bullets shatter the glass and riddle my body ... dead, but I see my exit.

It shouldn't be surprising that these sorts of temporal manipulations have become so commonplace as to enter the very logic of more recent games. Prince of Persia: Sands of Time took the next step in replay: Rather than leave it an unspoken component of the medium, as with my experience of Mirror's Edge, Sands of Time made replay a deliberate part of the game's internal reality. When the Prince misses a ledge and falls to his doom, the titular Sands allow him to manipulate time, moving back to the moment just before he jumped. In Sands of Time, the act of replay becomes the crux of the story.

But is this shifting temporality any less important to my experience of Mirror's Edge?

I could not escape the parking garage without the knowledge I gain from replay, and it's only through this sort of trial and error that I'm able to finally master the game. As the Prince, I may wield the mystical Sands of Time to undo my missteps and avoid catastrophe, but as Faith, I hold similar powers. My mistakes are never final, my uncertainty is always short-lived and sooner or later I'm able to negotiate the world with perfect foresight. I might never have such prescience in my own life, yet I can always attain it in videogames. It just takes a few replays.

I kick open the door, slide beneath the pipes, break for the stairs, ignore the blue, charge down the ramp, turn left, duck behind the cargo truck, smash the glass wall, hit the elevator button, duck inside and casually wait as the doors close behind me.

Pfft. That was easy.

Robert Buerkle is a visiting professor of videogamery at the University of Pittsburgh (where he also teaches film studies). When he's not teaching, he writes stuff.