Starting about a year ago, my partner and I decided to sit down once a week and examine our spending habits. We focused on making little, painless changes that would add up over time. One of the obvious places to cut costs was gaming, and we decided that I should lay off buying new games and focus on discounts and clearance sales instead. 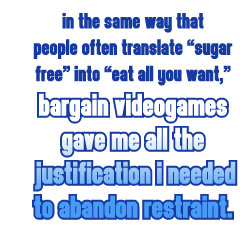 The plan backfired. I enjoyed economizing so much that my gaming budget more than doubled. In the same way that people often translate "sugar free" into "eat all you want," bargain videogames gave me all the justification I needed to abandon restraint.

I found there are scores of games that need rescuing from clearance racks and bargain bins, and they come with all sorts of Milo Minderbinder reasons why I can't afford not to buy them. Cruising through GameStop's PC gaming ghetto, I spot GUN for $10 and know that I likely will never see a boxed copy for this price again. If there ever comes a day when I actually want to play it, I would regret not snagging this deal. So I buy it, feeling great about all the hypothetical future money I just saved.

In retrospect, publishers were helping me save money by charging $50 per game, since that price brings significant disincentives. A shade too much for an impulse purchase, it forced me to ask "What else could I do with this money?" The answer is usually "something much better."

Unfortunately for me, it turns out that a game selling for $20 or less flies well below the radar of my better judgment. These are amounts that I can easily translate into other things I've wasted money on without a second thought, so my conscience remains untroubled when I hit the register.

It's possible that I've crossed a line into compulsive behavior. I can't go to the mall without cruising through GameStop, and the moment I step inside a Best Buy or Target, I beeline for the software section regardless of what originally brought me there. These impromptu bargain hunts exasperate my partner; one moment I'm right there beside her picking out toilet cleaners and fluorescent tubes, and the next she's alone with the cart and the shopping list, which notably does not include Sins of a Solar Empire.

When she finally tracks me down, I have my justifications ready. "Hon, this game is usually $40, but check it out! It's on sale for $20."

"Yeah," she says carefully, noting the mad, missionary light in my eyes. "But I've never even heard you talk about this game. Is this something you're really interested in?"

"Oh yeah! I've had my eye on this one for a long time. The guys from Gamers With Jobs have been going nuts about it for awhile." (She likes the guys on the GWJ Conference Call, finding it the second least-intolerable gaming podcast that I listen to.) Then, for some reason thinking this is a selling point, I add, "Apparently this game is so crazy that multiplayer matches take like nine or ten hours. It consumes your weekend."