I recently visited a friend who had just been laid off from his job. When I arrived he was sitting on a couch in his living room dressed in boxers and a T-shirt with a few days worth of stubble on his face. 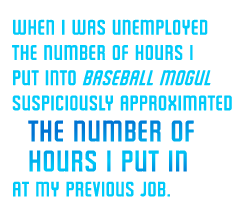 He grunted and waved a half-eaten chicken leg at his TV, which showed the pause screen of Animal Crossing. Evidently he'd been spending most of his suddenly unfettered time frolicking with forest creatures and fulfilling his consumerist impulses by stuffing his digital house full of all the things he could no longer afford in real life.

I asked him how much he'd been playing the game. He wasn't sure exactly, but judging by the sheer compendium of crap he'd accumulated, he'd been treating it something like a full-time job.

One of several general manager simulations available, Mogul puts players in the front office of an MLB club where they manage free agent signings, trades, drafts and finances. It's like fantasy baseball but without the prerequisite that you bore people about it at cocktail parties. It's also a perfect game for the unemployed, because it mimics the duties of a real life profession (however inaccurately).

It soon took over my life. Searching for a job offered only a string of disappointments: a lot of effort put toward the hint of a future reward so distant as to seem intangible. Reading books, taking walks, cleaning, exercising and doing all the other things I finally had a chance to do proved even more unappealing, spoiled as they were by the perpetual notion that I really ought to be spending that time scouring job boards instead.

But with videogames, the regular rules don't apply. Games, with their constant and measured stream of information and stimulation, distort and supersede the very idea of time. Every hardcore gamer has experienced that exhilarating and frightening moment when the urge to urinate becomes so strong that he finally pauses his game and looks up from his TV or computer screen only to discover that six hours have passed unnoticed, the sun has started to rise, he has to go to work soon, he completely forgot to do laundry last night and is currently inhabiting his final pair of (questionably) clean underwear. Without a job and the punishing regularity it provides, this moment can be repeated daily with no ill effects. Or at least, fewer ill effects. And by degrees, rare epic sessions become ritual.