For fans of retro and classic gaming, the word "obsolete" is meaningless. Buoyed by a mix of nostalgia and some examples of truly creative game design, a lot of players consider games that came out even two decades ago as viable today as they were back then.

But for all their devotion to classic titles, there's one major obstacle for players to overcome: the hardware itself. Laserdisc players in video arcades, floppy disk drives and keyboards on the Commodore 64, joysticks on the Atari 2600 - sooner or later, all of them begin to sputter and die under the strain of years of abuse. Some people continue to maintain these antique machines, but with years passing and no new models being produced, this becomes an increasingly difficult and expensive proposition. 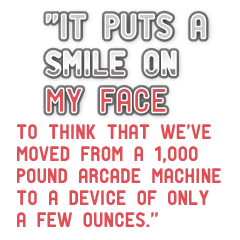 Beyond keeping a vintage machine in museum quality, what's the best way to preserve these older games? For many developers, the answer is literally in the palm of their hands: the iPhone.

It's an odd marriage - the sleek, polished smartphone with the gaming libraries of systems not even a hundredth as complex - but the platform is proving surprisingly versatile for retro fans. Emulators, remakes and direct ports have been flooding the iPhone App Store in recent months, giving a new lease on life to games that would otherwise be close to extinction.

"It puts a smile on my face to think that we've moved from a 1,000-pound arcade machine to a device of only a few ounces," says Paul Gold, Supervising Producer at Digital Leisure, a company that remasters older video-intensive titles for newer platforms. Digital Leisure entered the iPhone field in May with a complete port of Space Ace.

Porting older games to newer systems has been popular for years among fans, and the internet is full of emulators for vintage systems. More recently, developers have awakened to the potential of cashing in on nostalgia and branched out to offer a sizable catalogue of titles in original and remade form through services like the Xbox Live Arcade.

So why do developers think the iPhone can offer a home for these classics? George Broussard, Lead Designer at 3D Realms and co-creator of Duke Nukem 3D, says the iPhone lets developers make games "without the same publishing hassles and costs that come with larger consoles." Broussard says the decision to create an iPhone version of Duke in collaboration with MachineWorks Northwest was made easier by its development and reception on the XBLA.

Other established developers are just as enthusiastic about the iPhone. After Wolfenstein 3D and Doom creator id Software established an iPhone division, Technical Director John Carmack decided to experiment with those earlier titles as a trial run for the platform. Using the original code of Wolfenstein 3D with a few tweaks, like removing the status bar and inserting an automap, he wound up with a fully functional game that compared favorably to the original release. "Simplicity plays well on the iPhone," Carmack said in his development notes.

Carmack has clearly indicated his support of the iPhone in recent interviews, and he's also said there will be much more professional efforts made on older titles - Doom is currently in development, with Quake and Quake II to follow. Retro games will be one of three "prongs" for id's iPhone department, along with "from-scratch" games like Doom Resurrection and traditional games such as Wolfenstein RPG.