Let's get this out of the way: There are funny games out there on the Xbox 360, Nintendo Wii, and Playstation 3. Maybe not many, but games like Portal, Ratchet and Clank Future: Tools of Destruction and Super Paper Mario deserve some credit for making gamers chuckle. But they're not edgy. 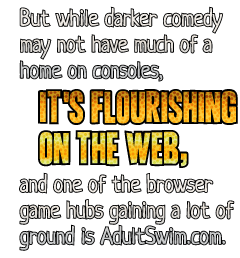 Most of the humor in games is a light-hearted affair and for good reason. Games that go for "edgy" don't fare well at retail. Take, for example, the recently released game Fat Princess, which rode a wave of blogger controversy into the gamer consciousness and then promptly receded from it a few months later. Then there's MadWorld. The director, Shigenori Nishikawa, piled the bloody slapstick violence of impalings and chainsawing into his game hoping to get lots of laughs from the players. The ratings board in Germany didn't think it was funny, so they banned the game. Watchdog groups in the U.S. and U.K. tried to do the same..

But while darker comedy may not have much of a home on consoles, it's flourishing on the web, and one of the browser game hubs gaining a lot of ground is AdultSwim.com. Here you can play some of the most unusual characters in the videogame universe, such as the spy who also happens to be a gigolo in the point-and-click adventure game Gigolo Assassin. In Meowcenaries, you blow up kitties with grenades and rockets. A suicidal office employee called Stan is the tragic "hero" in Five Minutes To Kill (Yourself). He can't stand the thought of sitting through another boring meeting, so the entire game is dedicated to finding ways to kill himself (via staplers, scissors, microwaves, etc.) before five minutes or else the game is over.

You can even play as the most powerful character in the universe, God himself, in Bible Fight. On paper you would expect the Almighty to decimate his foes the way some people like to step on ants, but in Bible Fight he's just another game character with a few special moves, just like his counterparts: Moses, Eve and Satan. As they duke it out in familiar biblical settings, Eve can call on Adam to deliver an uppercut to her opponent, while Moses can bring down a plague of frogs from the sky. You even get to play as Jesus, who can fling a crown of thorns at his opponents and smash them with a giant cross.

Why Occupy Flash is Dangerously Forgetful Fanghawk 8 Comments
Comments on