This year, more than 15 million earthlings strummed, drummed and blared along with rock classics on plastic toy instruments. And Tod Machover is the guy who let them do it.

Back in the early '90s, in his lab at the Massachusetts Institute of Technology, the professor of musicology helped Harmonix founders Alex Rigopulos and Eran Egozy build the software technology that would later become the core of Guitar Hero and Rock Band. By adapting Machover's basic research in music technology into a videogame application, they taught the world a new way to appreciate rock music. 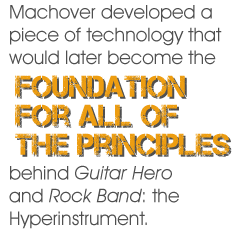 "Thanks to Guitar Hero and Rock Band, certain musical values and qualities can more easily be explored by laymen," says Machover. "You don't need to be a trained musician anymore to appreciate music on a deeper level. It's such a great invention. I wish I could say I came up with it."

But Machover's own merits in the process aren't to be underestimated. Guitar Hero evolved out of more than two decades' worth of Machover's research at the junction of musicology and computer technology. As a young Juilliard-schooled master of musicology, Machover moved to Paris to become a composer-in-residence - and later the Music Research Director - of the Institut de Recherche et Coordination Acoustique/Musique (IRCAM), before returning to the States and occupying the Professor of Music and Media chair at MIT in 1985. During these first years at MIT, he developed a piece of technology that would later become the foundation for all of the principles behind Guitar Hero and Rock Band: the Hyperinstrument.

Machover built several musical instruments, such as a cello, a violin and a piano, with embedded touch sensors on their surface, and connected them to a PC. The software on this computer, written at Machover's lab, would then pick up on the slightest variation in intonation and attack that a musician exerted over his instrument. This data allowed a computer-generated orchestra to accompany the musician's work with an appropriate score. If, for instance, the computer noticed the musician was firing up his performance, the virtual orchestra would accentuate this further by layering on some percussion work; when the player toned it down, the orchestra would ease accordingly.

At first, the aim of Machover's Hyperinstrument research was to offer virtuoso musicians an extra aid to improve their performances. But by the time Rigopulos and Egozy entered his lab as master's students, the focus of the research had already broadened to a new and nobler goal: making music creation and appreciation more accessible for unskilled players.

The two students quickly got the message, says Machover. In 1994, as the subject for his master's thesis, Rigopulos developed the Seed Music System, a piece of computer software that converted simple actions like button presses into complex musical sequences. That way playing an instrument could be made so accessible that an unskilled musician would be able to play along with any song he likes.

"There is a large population of these people," Machover notes. "They think music is important, but they don't have the skills to play it. And you know why? It's because, technologically speaking, the interface on which skilled musicians play - a musical instrument - is too primitive."