We need to talk.

It's hard to believe no matter how many times you hear it, but it's the truth: Your game idea sucks. Other people might be sugar-coating this for you, but I won't. It's nothing personal; I know you think you've come up with the most incredible idea ever to rock the videogame world, the videogame to end all video games, a game so original with a story so amazing that it'll make us all millions while simultaneously curing cancer and saving the whales. But here's the thing: It won't. Because your game idea actually sucks. 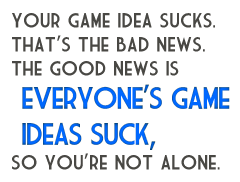 That's the bad news. The good news is everyone's game ideas suck, so you're not alone. And hey, now that you know, you can stop wasting your time worrying about it and actually sit down to make a game - or come to peace with your perfectly acceptable game-player-not-game-designer existence. Either way, you'll stop sending me emails asking me to break your heart.

Our first contestants live in a wonderful little fantasy world where ideas result in the opening of wallets. Some of these specimens are videogame neophytes who know nothing about the medium other than what they have gleaned from op-eds in their local newspaper, which mainly tell them the videogame industry has cash blowing out its ears and no economist or self-respecting businessman can understand why because, come on, they're just games. These are the people who message me on LinkedIn through their very well-meaning colleagues, wanting me to find them a development team to execute their brilliant idea and split the profits with them 50-50, because, after all, they are the subject matter expert and no one has yet made a Wii game about underwater basket weaving.

They're fine folk, but they inevitably walk away crestfallen when I ask them if they have $500,000 - which I know they don't, because if they did they almost certainly wouldn't be cold messaging a game designer on LinkedIn.

There's another subset of the "we'll make millions!" crowd that comes right from the beating heart of gamedom itself: amateur, novice or otherwise hopeful game designers who have been nurturing the same game idea since they were 12 and are absolutely certain that if someone just made their game they'd all be filthy rich. They have documents and extensive wikis and painstakingly commissioned character concept art and volumes of character history, and even if other people's game ideas might be worthless, well, that certainly doesn't apply to them - look at all the work they've done!

Tabletop: Meet the Man Who Decided What Went in Dungeons & Dragons JonB 3 Comments
Comments on