Pity the princess - all dressed up, and nowhere to go. While the hero gets to scramble about to his heart's delight, the videogame princess exists in a state of eternal kidnap, perpetually "in another castle." It is a thankless task. She sits. She waits. She does the odd crossword puzzle. 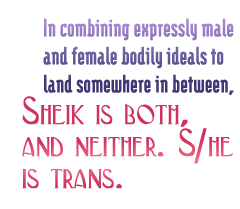 This idea didn't originate with videogames, of course. The archetypal damsel has been around for as long as people have been telling stories. But it does serve as a reminder that our games, even at their most simple, convey ideas about sex and gender. The "damsel in distress" is an explicitly gendered role, comprised of archaic models of femininity: They are pink, frilly heaps, made up of equal parts helplessness, uselessness and hysteria. Put another way, a damsel is not simply a helpless female - a damsel is helpless because she's female.

As an alter-ego of Princess Zelda, from Nintendo's Legend of Zelda series, Sheik is everything Zelda is not - in fact, she's everything that Zelda cannot be. As far as princesses go, Zelda gets off better than most. She brings a certain stately grace to the role, and is a figure of wisdom and insight. Operating in a trinity that includes the villain, Ganon, symbolic of power, and the hero, Link, symbolic of courage, Zelda serves as seer and spiritual conduit. But though she is elegant and refined, it is exactly these traits that keep her off of the field of play. As an oracle, she may offer advice and comfort, but she's still a captive to forces beyond her control.

All this changes in Ocarina of Time. At a crucial point in the story, Link is sequestered away for seven years in order to mature into the hero he is destined to become - quite the wait. But rather than sit back and break out the Sudoku, Zelda springs into action, transforming into Sheik to directly influence her troubled kingdom. Lithe, quick and capable, Sheik is a hero. Of course, Sheik is also a man.

Or nearly a man, anyway. Though Sheik is explicitly referred to in Ocarina as "he," there's room for confusion. Swaddled in a bandanna and scarves, Sheik is as ambiguous in form as in motive. Like the feminized "bishonen" men of manga, Sheik is an odd assortment of stylized gender features. There are those expressive red eyes, those broad shoulders, those ropy muscles, all tied together by a relaxed, almost feline agility. In combining expressly male and female bodily ideals to land somewhere in between, Sheik is both, and neither. S/he is trans.

The Danish Girl - Transgender Issues in the 1920s Marter 165 Comments

Gallery of the Day: 8 Reasons Link Is Relevant After 28 Years DrStrangelove 13 Comments
Comments on