It started out innocently enough. A bipedal lizard that shot eggs out of his mouth wanted nothing more than to be a girl, so he wore a bow on top of his head.

According to the instruction book for Super Mario Bros. 2, released in 1988, the mini-boss Birdo "thinks he is a girl and spits eggs from his mouth. He'd rather be called 'Birdetta.'" It seems like a harmless distinction, but this simple act of cross-dressing was soon erased from the history books. In all subsequent Mario releases, Birdo is referred to as a female, completely ignoring his gender confused roots. 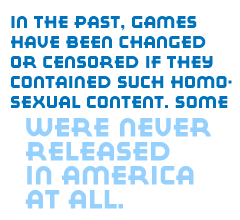 Birdo isn't alone, though. He's just one of a long line of Japanese videogame characters forced to hide their true sexual identity when their games are localized for a North American audience. While Japanese gamers have been exposed to characters of various sexual orientations, the practice is only just starting to catch on in the West. In the past, games have been changed or censored if they contained such content. Some were never released in America at all.

That's largely due to the way the two different cultures view sexuality. North American viewers tend to be bombarded with violent imagery, while depictions of sexuality - especially involving lesbian, gay, bisexual or transgender (LGBT) people - raises more eyebrows than anything else. A poll conducted by family gaming site What They Play in April 2008 offers further evidence of this aversion to homosexuality in media: When shown a series of provocative pictures, respondents were more offended by the image of two men kissing then that of a severed head.

Meanwhile, in Japan, many of these taboo issues are commonplace in popular media. In fact, there's an entire sub-genre of anime and manga called "yaoi" that focuses on homoerotic male relationships. These books and shows, also commonly referred to as "boy's love," are generally created by female authors for female readers, while "bara," or "men's love," is written by gay men for a gay audience. While many Americans would rather witness a decapitation than see boys kissing, Japanese bookshelves are full of this sort of material.

So it shouldn't be all that surprising that early games like SMB2 were subject to such censorship. If parents in North America felt squeamish about homosexuality in 2008, imagine what it was like two decades earlier. Publishers had no qualms changing characters, halting games from release and generally doing as much as they could to keep the American youth from witnessing any girl-on-girl or boy-on-boy action.

Letters to the Editor: Queer Eye for the Gamer Guy The Escapist Staff 0 Comments
Comments on