Take, for instance, the character Ash from Streets of Rage 3, which hit the Sega Genesis back in 1994. You may not remember this flamboyant mini-boss, and that's understandable - after all, he was never actually featured in the North American version of the game. Instead, Ash - who was clad in purple and green, pranced about the screen effeminately and wore a gold chain with the female symbol around his neck - was cut from the game entirely, only available to Europeans or those in the U.S. who were crafty enough with a Game Genie to unlock him as a playable character. 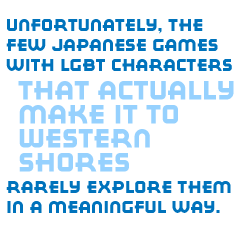 Probably the most infamous example of homoeroticism in games, however, is the Cho Aniki series. Debuting in 1992 and spawning numerous sequels, Cho Aniki is not entirely unlike most 2-D, side-scrolling shooters: You control one of several different characters and fly around the environment blasting enemies and collecting power-ups. Screen-filling bosses punctuate each stage, and a semblance of a plot holds everything together. What has garnered this series such a cult-following, though, is that it is absolutely inundated with homosexual imagery.

The Cho Aniki series fits very neatly into the "bara" category of Japanese entertainment. All of the male characters are oiled, buff and wearing next to nothing, while phallic imagery is plentiful. But while the series has been around for quite some time, having seen entries on the PC, Super Famicom, Sega Saturn, PlayStation, PlayStation 2 and Wonderswan, the games aren't all that good. In fact, they are often lumped into the category known in Japanese culture as "kuso-ge," which literally means "shitty game."

When you combine the fact that the Cho Aniki series is made up of titles that feature oiled up men fighting penis monsters with the games' generally low quality, it's not surprising that publishers aren't lining up to localize them for Western tastes. Even in an age when ESRB ratings help to shield children from such sexually explicit content, not everything is going to appeal to American gamers.

But despite the diligence of localization teams, some rare gems have slipped through the censors and continue to live on in internet infamy. Guilty Gear's Bridget may have both the name and the look of a female, but is in fact a young cross-dressing boy. The same goes for Poison from the Final Fight series, who is actually a transvestite rather than the beautiful lady he appears to be. These facts aren't made explicit by the developers, but they're well known within certain circles of hardcore gamers.

Unfortunately, the few Japanese games with LGBT characters that actually make it to Western shores rarely explore them in a meaningful way. Their sexual orientation is either a secret that doesn't really affect the game (as with Bridget and Poison) or an elaborate joke that exploits the issue purely for comedic value (as in Cho Aniki). This is even visible in the revered roleplaying epic Final Fantasy VII. Though protagonist Cloud is clearly heterosexual - given that he's stuck in a love triangle with the two female leads - he's forced at one point in the game to dress in drag in order to infiltrate a brothel, seduce a pimp and rescue his friend.