The scene elicits giggles from a number of characters and provides the basis for quite a few awkward and questionable scenes. While looking for a wig to complete his disguise, Cloud is told "You know the gym? You'll find a lot of people like you there. Go talk to them." Cloud must then acquire a blonde wig from a group of weightlifters who ask if he's the one who "wants to look cute." Aside from a near kiss with a mob boss, Final Fantasy VII contains no actual homosexual activity, but the message is pretty clear: Men who dress up like women - and men who like men - are more than a little ridiculous. 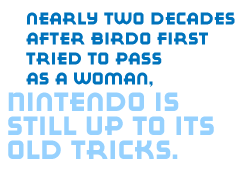 More recent titles have treated the subject with greater respect, most notably the PlayStation 2 RPG Persona 4. Unlike most depictions of homosexuality in games, we don't immediately know that Kanji Tatsumi, one of the game's main characters, is gay. He's a bad-ass, take-nothing-from-nobody kind of guy, far from the stereotype of the effeminate gay man. This approach is refreshing in its honesty: Kanji isn't just some boy-crazy kid who is laughed at by all the other students, and he doesn't necessarily come to grips with his feelings right away. Instead, his realization of his sexuality is messy and difficult, which is a much more nuanced depiction of homosexuality than, say, a pair of near-nude muscle men fighting a giant penis-shaped monster.

But this sort of look at the issue is exceedingly rare, especially in the realm of videogames. And while it's nice to think that things will continue to improve and that one day LGBT references won't have to be removed or edited from Japanese games localized for other markets, it doesn't seem like it will happen any day soon. After all, Persona 4 is a fairly niche title, and just one title in a sea of games that are content to paint homosexuality in broad strokes or whitewash the subject altogether.

Meanwhile, nearly two decades after Birdo first tried to pass as a woman, Nintendo is still up to its old tricks. In 2006 it released a spin-off of The Legend of Zelda series starring everyone's favorite fairy wannabe, Tingle. But while Freshly-Picked Tingle's Rosy Rupeeland only features a few campy sequences that imply he might be gay - such as a brawny construction worker whistling as he passes - Nintendo still deemed it unfit for North American release. Tingle may be out in Europe and Japan, but it seems America would rather gay videogame characters stay in the closet.

Andrew Webster is still holding out hope that one day Cho Aniki will be localized for an English audience. Find more of his work at www.awebster.wordpress.com.

Dude Looks Like a Lady Brendan Main 78 Comments
Comments on