In a way, "Handle With Care" isn't really about gay marriage at all. With only one casual mention of a word, the significance of which was likely lost on many players, it's hardly anything to talk about. What about the mind-bogglingly frustrating gameplay, the inconsistent implementation of physics or the esoteric in-game "visions" that resemble mediocre video projects cobbled together by art school dropouts? I expected criticism of my work, but to me there were far more pressing issues than the player character's sexual orientation. 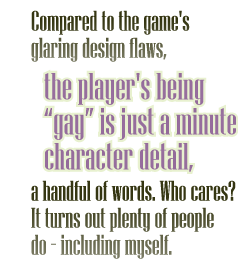 (Plus, if I had wanted to complain about gay rights and the pervasiveness of homophobia, I wouldn't bother with building an entire videogame to send a message; instead, I'd write a long-winded article and publish it on a well-trafficked online website about videogames ... well, all hypothetically speaking, of course.)

At no point in "Handle With Care" are you forced to be especially "gay." The game never asks you to prance about and shop for vintage clothing or chat with your mom about the latest episode of Gossip Girl. Rather, the gameplay consists of the most boring and neutrally charged mechanic possible: ducking into crawlspaces and stacking crates. You are a human forklift in videogame purgatory.

Compared to these glaring design flaws, the player's being "gay" is just a minute character detail, a handful of words. Who cares? It turns out plenty of people do - including myself.

A few weeks ago, a mailman spat at me for sitting on a bench next to my boyfriend. He nearly swerved into a parked car just to do it. We weren't being especially "gay" - we were just sitting there. But homophobia isn't always such an overt case of hate or "intolerance" with a capital "I." Rather, I define homophobia as anytime I feel pressured to compromise this crucial part of myself. It is everywhere and always.

It is two months ago, when an editor at The Escapist suggested that readers might not fully appreciate my game design analysis of OkCupid in "Grinding the Dating Scene" if references to my preference for dudes stayed in the article. I agreed and changed it.

It is a few weeks ago, when I was finally able to relax with a game of Counter-Strike when a terrorist player knifed me in the back, tea-bagged my lifeless corpse and then playfully called me a "fgt." Of course, he had no way of knowing I was gay. He simply meant "faggot" in the colloquial, well-understood sense of "idiot" or "player with poor aim and a mediocre sense of tactics."

Gallery of the Day: 8 Mods that Need to be Made for GTA 5 ffronw 14 Comments
Comments on