When a gay person hears "faggot," they hear it as a question: "Remember when that mailman spat at you?" or maybe "Remember when your mother cried when you finally managed to come out to her?" It is the sound of pain, confusion and fear - or perhaps mild amusement that the mailman could only spit a measly meter from his door - but usually it is an unpleasant memory, like one of the fragile crates breaking with an orange flash in "Handle With Care." 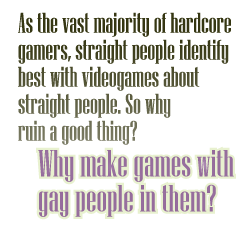 That's why I don't quite understand why this website is called The Escapist. For me, videogames aren't a retreat into fantasy. When I play, I don't escape from anything, but rather I see reality in clearer and louder detail than ever before.

And that's why, in "Handle With Care," the player character, James, is a fag and his partner Dylan is a fag and they have a big ol' fag marriage in California, because it's those words, "partner" or "faggot," that reminds me of my difference - how it's still socially acceptable to discriminate against me and how no one will ever let me forget this.

So yes, in a way, my mod isn't about gay rights at all - but that's also perhaps why it's almost entirely about gay rights. It's about how a gay person's life has all the humor, pain, happiness and anxiety of a straight person's life, how the two are otherwise indistinguishable - and yet gay marriage is still recognized as mere partnership, a transaction devoid of emotion.

But why should you care? You're (probably) not gay. You (probably) don't dislike gay people per se; they simply confuse you a bit, is all. They should just leave you alone, really. You're just not sure why anyone would feel compelled to inject some "vitamin gay" into an otherwise "normal" videogame. As the vast majority of hardcore gamers, straight people identify best with videogames about straight people. So why ruin a good thing? Why make games with gay people in them?

Because if I can't escape from reality through videogames, you shouldn't either. Because games about gay people are unpopular and unprofitable, and thus no one else will make them. Because before we decorate your house, you need to understand where we're coming from. Because gay people would rather be your friend than your enemy. (And don't worry, we won't try to seduce you. The sex would be awful.)

Because videogames need to innovate through new mechanics and narratives, to incorporate new voices and perspectives - because we need to evolve past the same male power fantasies, those same damn games with big-muscled, half-naked men shooting their big thick ... railguns ... all over each other's faces.

Um ... not that there's anything wrong with that, right?

Robert "Campaignjunkie" Yang designs levels and weird pretentious art-house mods for Half-Life 2. You should play them. In his spare time, he's also an undergraduate English student at UC Berkeley.

Gallery of the Day: 8 Mods that Need to be Made for GTA 5 ffronw 14 Comments
Comments on