In some ways, "massive" is the perfect word to describe online gaming. It communicates a certain heft - a suggestion that our games have not just become larger, but gained shape and substance. As massive gaming models have become more prevalent, the term has only increased in usage, finding its way into a bevy of acronyms each more weighty than the last: MMORPG, MMOFPS, MMORTS, etc. Even in debates on how best to classify these games - do we stick with the oddly truncated "MMO" or the accurate but somehow lopsided "MMOG"? - there is always the assumption that whatever else these games may be, they're certainly massive. It's the one M to rule them all. 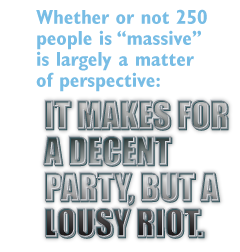 But while "massive" has become central to discussions of online gaming, it's also proven to be ambiguous. The term itself is confusing: For all its claims to girth, "massive" is not just a matter of size, but of continuity. Through dedicated servers, massive games are maintained continuously, irrespective of the presence of players - a trait known as "persistence." According to this definition, a massive game is not simply large in terms of players, or even sheer in-game territory. To be massive is to be large in scope.

This breadth of design often lends itself to larger games, but that's not always the case. The first few games to aspire to massive levels of play were large in spirit, if nothing else. The term itself was popularized by the team behind 3DO's Meridian 59. Used by CEO Trip Hawkins to describe a new plateau of gaming, Meridian 59's "massiveness" was quite modest by current standards - though the game attracted more than 25,000 players to its public beta, individual servers could only host 250 players at a time. Whether or not 250 people is "massive" is largely a matter of perspective: It makes for a decent party, but a lousy riot. Cop cars don't flip themselves, after all.

Then there is the uncomfortable fact that, by this standard, games have been massive for quite some time. The concept is old enough to predate the popularization of such fancy things as "the internet" and "graphics." Consider the lowly MUD, or "multi-user dungeon," back when MM was just M. Early text-based MUDs networked across precursors to the internet such as ARPAnet, resulting in a low-fi version of the same model: a persistent multiplayer gamespace. So it isn't just that massive environments weren't always particularly large - it's that games were massive before we'd even started sizing them up.

Extra Punctuation: Colonial Marines Developers Should Own Up to Screwing Up Yahtzee Croshaw 50 Comments
Comments on