Some power circles are so well-established you can't imagine how they came about in the first place. They seem like they've always been, that the men behind the curtain have had their hands on the wheel for so long, you forget the world once got by without their leadership. The shadow bankers behind the Fed, for example, with their arcane understanding of the ways money flows from the poor to the rich, or the lascivious Hollywood power elite couch-casting their way between the legs of the most beautiful women in the world. 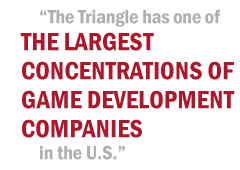 How did these bankers, these producers, establish themselves as the point men of their respective fields? How did they claim their stakes within the power structure? At what point did they stand up and declare that no financial transaction, no film, would be put forth without their tacit approval? We may never know.

Yet sometimes, if you're in the right place at the right time, you can get lucky and catch a glimpse of such a power circle in its nascent stage, when it's little more than a glimmer in some crafty entrepreneur's eye, when its future power brokers are still working out the details of their global domination. I've gotten a look inside one such power circle in the making, and I'm here to tell you it will soon dominate a part of the entertainment landscape about which you care very deeply. Also, it's not really a circle, but a triangle.

Deep in the heart of North Carolina, a "triangle" of three cities has evolved over the years into a cultural, technological and, yes, gaming hub of growing importance. In addition to playing host to many of the world's foremost technological and research companies (including IBM, Cisco and Nortel), North Carolina's "Triangle," generally defined as the area between the three focal points of Raleigh, Durham and Chapel Hill, has recently emerged as one of the fastest-growing hubs of game development talent, not only in the United States, but the world.

"The Triangle has one of the largest concentrations of game development companies in the U.S., with more than 30 studios and over 1,000 game industry workers in a metropolitan area of around one million," says Alexander Macris, CEO and Publisher of The Escapist and President of the Triangle Game Initiative (TGI), the region's rapidly growing cadre of videogaming power elite.

With all the attention on San Francisco, Los Angeles and New York as "centers of industry" in games, it makes sense that a little, out-of-the way hub buried deep in the tall North Carolina pine trees has escaped notice. But if the TGI has its way, that won't last. Frankly, one wonders how it could.

Letters to the Editor: Alphabet Soup The Escapist Staff 3 Comments
Comments on