Once upon a time, the world of gaming was so dreary that a yellow circle blew people's minds. In 1980, Pac-Man became a star almost by default, towering over such gaming "heroes" as the missile pod from Centipede the guns from Missile Command and the cannon from Space Invaders. Apparently, the gaming public didn't find turrets all that relatable. 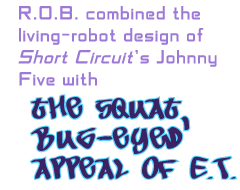 Many games followed Pac-Man's character-centric lead soon after. It's hard to say which era of mascots has proven most fruitful - the '80s arcade, the Sonic vs. Mario years or modern stars like Pikachu and Master Chief. They each have unique designs and personalities that have captured gamers' imaginations.

But none of those were as revolutionary as the most important gaming mascot of all time - and certainly the most unique. After all, only one mascot was your Buddy. You know, your Robotic Operating Buddy.

R.O.B. debuted with the Nintendo Entertainment System in 1985 as part of the console's deluxe package, tapping into its release year's ethos by combining the living-robot design of Short Circuit's Johnny Five with the squat, bug-eyed appeal of E.T. The result, at nearly a foot tall, was cute, iconic and hitherto unheard of in the world of videogames. Forget Pac-Man - this plastic contraption promised games that played with you in your living room.

Trouble was, it kinda, sorta, completely sucked. Annoying to set up, annoying to use and supported by a whopping two games, R.O.B.'s rank as Nintendo's most disappointing hardware release has stood the test of time. Not even the Virtual Boy could dethrone this disaster.

So why is it important? R.O.B., unlike every gaming device before it, delivered a control experience beyond basic directing, aiming and shooting. The cute little bugger typically gets credited as a mascot for the rebirth of home gaming, but more importantly, it blazed the trail as both the first major gaming peripheral and the first artificial gaming "buddy." When you wail on a Guitar Hero guitar, bounce on a DDR pad or chat up Seaman, know that R.O.B.'s red eyes are watching you.

Among the many reasons we aren't playing the Coleco Supernova or the Atari Jaguar-128X, the Great Videogame Crash of the early '80s is the biggest. Before home gaming could get a foothold in American living rooms, those companies, among others, just about killed the hobby through oversaturation.

They released too many games, most of which were at best bland and downright unplayable at worst. Furthermore, each company released incremental upgrades to their hardware, confusing a young market. Those factors combined to flood toy store shelves with unsold product. Atari has its famous story of burying thousands of unsold E.T. cartridges in a desert landfill, but let's not kid ourselves: Plenty of other lame games landed in that trash heap, too.