The history of games and martial conflict are indelibly linked. In war, each decision a combatant makes can have lethal results. This is true for every rank of soldier, from the lowliest grunt deciding where to stick his sword to the highest commander guiding troop movements across continents. The stakes are high: You either take the hill or die in the attempt. The same scenarios occur in wargames, but on a much smaller scale. War is hell, yes - but it sure is fun. 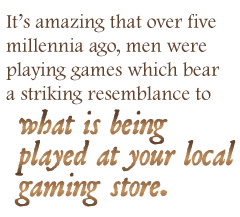 Since the beginning of recorded history, humans have played games which simulate the dramatic tension inherent in war. Game pieces meticulously carved from wood, bone and stone were found in Egyptian tombs dating as far back as 3500 B.C.E. Several ancient Egyptian games have been discovered, including Senet, Mehen and Hounds and Jackals, but their papyrus rule manuals (if they existed) sadly did not survive. Even so, it's clear in the game of Senet that the pieces represented men or military units and were placed on a finite grid that corresponded to a battleground. It's amazing that over five millennia ago, men were playing games which bear a striking resemblance to what is being played at your local gaming store.

Just as remarkable is that the only reason the evidence of these games remains is because they held religious significance to the Egyptians, who placed the game boards in the tombs of their pharaohs. For a people obsessed with predetermination, any player who could predominantly win at a game was deemed blessed by the gods. Some sources even suggest the Egyptians may have believed the departed played Senet in the afterlife, which explains why they left game boards with the dead in their tombs.

Another family of games which earned a place in legends and stories were the Tafl games. Believed to have been played since around 400 C.E, Tafl was spread by the Vikings throughout Europe, leading to many regional variants of the same basic game. As with the Egyptian games, no clear rulebook for Tafl has survived, but archaeologists have been able to deduce its basic gameplay from old manuscripts and the remains of game pieces and boards. All Tafl games depict a specific battle situation: the defense of a king or chieftain under attack by a force with superior numbers. The attacker's objective is to capture the king by surrounding him on four sides, while the defender must try to escape by finding a clear route to the edge of the game board. This simple setup led to surprisingly complex strategies and moments of extreme tension.

Like Senet, Tafl wasn't just played for amusement. The Celtic variant of the game, called Fidchell, had religious significance as well. The game was said to be invented by Lugh, the Celtic god of light, and skillfully played by his son, the warrior Cú Chulainn. In the stories, Fidchell held powers of divinity, with great battles hinging on the results of a match. The game had such a prominent place in Irish culture that the word "fidchell" eventually evolved into "ficheall," the Gaelic word for chess.