The chess we know and play today, however, did not spread into Europe until around the 12th century, and its origins couldn't be further from games like Tafl. Chess originated in the Gupta dynasty in India around 600 C.E. The earliest form was called chaturanga, which translates roughly to "four divisions." The game's chief innovation was its four unique unit types that roughly corresponded to those of the Indian army: infantry (pawns), cavalry (knights), elephantry (bishops) and chariotry (rooks). After spreading to Persia in the 7th century, where it developed the predecessor to the "check" and "checkmate" exclamations, chess slowly spread throughout Asia and Europe over the next 700 years. 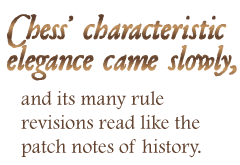 Chess' distinct unit types weren't just the only influence that real warfare had on the game. The top-down commander view of two opposing armies arrayed on a field was particularly representative of how battles were fought in medieval Europe, when chess reached its peak in popularity amongst the upper class and military leaders. (It's possible, though hardly provable, that military conventions of the age were influenced by chess.) Likewise, the game mimics real warfare in more subtle ways: In both arenas, an unexpected move that defied convention or perceived wisdom often won the day for the risk-taking general. A player placing his queen at risk of capture to open up his opponent's line of pawns may seem foolish, but his heart is surely pounding, hoping against hope that his opponent will take the bait and expose his flank. It's moments like these when chess feels vital and real.

The continued popularity of chess is arguably the primary reason that so many war games are played today. But the game's characteristic elegance came slowly, and its many rule revisions read like the patch notes of history. For example, the queen was once a fairly weak piece, only able to move diagonally one square at a time. It wasn't until around 1475 C.E. that she gained the ability to move two whole squares. Some revisions were regional: Turkey and Russia, for example, experimented with allowing the queen to jump over other pieces once per game, an ability only the knight possesses in the modern game. Other rule changes had unintended side-effects, as when pawns were allowed to advance two squares in their first move in an effort to speed up the start of a game. That eventually necessitated the en passant rule to prohibit pawns from passing the opponent's pawns without assistance.

But as well designed a game as chess is, in some ways it stifled the growth of wargaming. The eight-by-eight board is abstract, and most game designers were only successful in creating chess variants by adding more pieces or squares. It wasn't until 1811 that a breakthrough was made by Baron von Reisswitz of Prussia. He wondered what it would be like to plan strategic moves on a realistic map of actual terrain with a defined scale for troop size and movement. He sketched out a system, using 1:2373 scale - roughly three centimeters for every 100 paces - and went to work deconstructing the experience of warfare and reassembling it in miniature.