Perhaps the most striking advancement von Reisswitz made was his representation of the fog of war - the concept that opposing troop movements weren't always visible to a commander. He emulated this by introducing an umpire, an independent third party who received orders from the two generals and handled all troop movements on the map according to the rules. By using a neutral mediator, the game was able to accurately simulate how an actual battle would progress, including rules for surprise, artillery cover and line of sight. 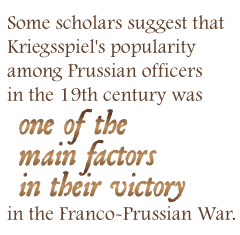 Von Reisswitz called his creation Kriegsspiel, the German word for "wargame." The Baron played it with a few friends and his son, but did not bother publishing what he considered a simple pastime. In fact, for all its genius, Kriegsspiel might never have been known today if it wasn't for royal intervention. The sons of King Friedrich Wilhelm III of Prussia were cadets at the Berlin Military Academy when their lecturer happened to mention that a civilian had created a wargame. The princes were intrigued and insisted on a demonstration of Kriegsspiel. They were so impressed that they asked von Reisswitz to show their father. In turn, the King became such a fan of Kriegsspiel that for years he would play late into the night, leaving the battle in place only to resume it the next evening.

In the meantime, Von Reisswitz's son, a member of the military, started his own gaming group and revised and improved the rules his father originally wrote. Prince Wilhelm heard of the younger von Reisswitz's new version and asked him to show it to Karl Freiherr von Müffling, Chief of the Prussian General Staff. Von Müffling was so enthusiastic about the game that he ordered a copy of kriegspiel for each regiment of the army and encouraged all ranks to play it in order to understand the complexities of commanding an army. That decision likely paid off: Some scholars suggest that Kriegsspiel's popularity among Prussian officers in the 19th century was one of the main factors in their victory over a much larger and fully professional French army in the Franco-Prussian War. It wasn't long before other militaries became interested in wargaming, directly copying von Reisswitz's creation or developing their own systems.

While warmongers continue to recognize wargames, both tabletop and electronic, as a means to train new commanders and innovate new tactics, the civilian consumer of today is inundated with videogames set in the theater of war. Real-time strategy games, a genre impossible to represent without computers, are now ubiquitous, and first-person shooters that encourage quick tactical decisions while under fire continue where fidchell and Kriegsspiel left off. In fact, every wargame throughout history, from chess to Call of Duty, simulates the same basic experience: one where the decisions players make are the difference between victory and death.

Greg Tito plays all games and occasionally writes about them.