Since primitive man first drew crude stick figures on cave walls depicting struggles with massive prehistoric creatures, mankind has always glorified and been enthralled by stories of battle. While we award prizes for efforts toward making peace, we also idolize the warriors of our society and glorify them in every medium possible. From oral history to written tales to movies to videogames, legends of brave soldiers in violent clashes have always stirred something within us. 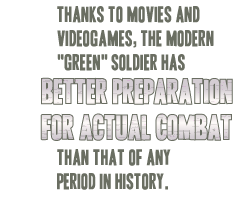 Of course, stories never do the reality justice, no matter how well they presented it. No one will argue that the portrayal of the landing at Omaha Beach in Saving Private Ryan isn't visceral. It is gritty, violent and extremely graphic, full of exploding body parts and soldiers engulfed in flames. Yet most viewers don't dwell on the soldiers that are killed - instead, they focus on the soldiers that make it through that hellish battle and continue on to search for Private Ryan.

That's because in our minds, we're picturing the "me movie" - we are the stars of our own film. When bad things happen, we expect the heroes to pull through victoriously because we identify with them. This is particularly true of modern soldiers that encounter combat for the first time. As the portrayal of war in movies and videogames has become more realistic, the eventual shock of reality that soldiers experience the first time they engage in combat can be offset by their previous immersion in battle simulators.

In many ways, this is an advantage. The modern "green" soldier has better preparation for actual combat than that of any period in history. Yet this prior exposure can also be a liability. With their experience of videogames and movies dictating their expectations, young soldiers can rush headlong into dangerous situations without truly understanding that there aren't any respawn points in real life.

Charlie Wenger was a 19-year-old electrician fresh out of high school when he was drafted in 1942 to serve in the U.S. Army. Today, he is famous for the 1945 photograph by Carl Mydans that shows MacArthur making landfall on the Luzon Island of the Philippines with three other soldiers. Wenger is the garish young soldier with a pistol on his hip and a grimace on his face as they wade through the waves to the shore.

"He asked me who was in charge," Wenger says. "I said no one was - and MacArthur told me I better get him to someone that was in charge!"

Wenger had never seen a war movie prior to being drafted and had no idea what was in store for him. Not even his training really prepared him for the experience of combat, and what training he had was more in preparation for grueling marches than squad tactics.

"We didn't really do much training," Wenger says. "All I seem to remember is marching all the time in basic training. I trained on the 37mm anti-tank gun. We were supposed to knock out the machine gun nests, but when we got to the islands, we couldn't get [the cannons] through the jungles so we never used them!"