Most videogames don't portray defeats. They brush past them the way morning commuters can practically step over the panhandlers outside a subway station without even seeing them: attention front and center, faces carefully blanked. Even when loss and defeat should be inescapable, games are almost Houdini-esque in their ability to extricate themselves from the traps laid by history. 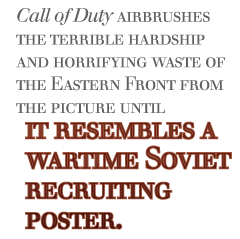 Instead of attempting to portray both outcomes in a conflict, videogames tell the same war story again and again. The good guys always fight against overwhelming odds. They pursue objectives that fit together as neatly as pieces of a jigsaw puzzle until they complete their mission. In the end, they win a great victory: The Red Banner flies from atop the Reichstag, or the Germans retreat from Normandy.

Videogame portrayals of warfare are often so one-sided that even the most brutal campaigns can seem like a walk in the park. Call of Duty presents the Russian experience of the Battle of Stalingrad - the bloodiest conflict in human history, with an estimated 850,000 German and 1.1 million Soviet casualties - without depicting a single setback or failed attack. The Soviets enjoy an unbroken string of successes from the moment the campaign opens, despite the fact that you initially find yourself in the midst of a human wave attack against German fortifications, armed with a rifle clip but no rifle. The game airbrushes the terrible hardship and horrifying waste of the Eastern Front from the picture until it resembles a wartime Soviet recruiting poster.

In other games, the good guys prevail even when the record clearly shows they didn't. NovaLogic's Delta Force: Black Hawk Down recasts the U.S. intervention in Somalia as a sort of aggressive humanitarian operation. (Take a moment to let that statement sink in.) In the first mission, you fight to save a refugee camp by shooting Somali militiamen from behind a convoy of U.N. food trucks. Later, the game places you in the Battle of Mogadishu, where you help recover the two downed Black Hawk crews without much difficulty; you even get the chance to assassinate Somali warlord Mohammed Farah Aidid in the game's "just desserts" postscript. Nowhere does NovaLogic's version of the story mention the costly mistakes in the rescue effort that resulted in 18 dead and 83 wounded U.S. soldiers, nor the hundreds of civilian casualties that ultimately put an end to the American presence in Somalia.

Even when a game acknowledges that war doesn't always go according to plan, players are absolved of responsibility for their losses. Brothers in Arms: Hell's Highway portrays the failed Allied attack on Holland in the fall of 1944, but the campaign's worst tragedies are confined to the game's cut scenes. As long as you're in control of the action, fatal mistakes become temporary setbacks; if you send three of your men headlong into a German machinegun nest, you need only wait until the next checkpoint for them to spring back to life. At the end of the game, the Allies must retreat, their ambitious airborne operation a failure - but not before you get the chance to overrun a series of German strongholds and then bulldoze a few more with a tank. Half your squad might be dead or in the hospital, but you just single-handedly demolished a German battalion or two. What do you mean, "we lost?"