Before Men of War, I'd entirely given up on the World War II strategy genre; I even found Relic's Company of Heroes series a little dry. How could this well-trodden subject matter and gameplay ever be interesting again? Best Way's answer lay in their almost absurd ambition. Men Of War demonstrates a kind of game design philosophy we seldom see, one that says you should allow for as many possibilities in your game world as you can. Rather than begin with the basics and work up from there, Best Way seems to have started with a list of every scenario that can occur on a battlefield, then tried to make each item a distinct possibility. It's simply jaw-dropping in Men of War when a tank falls through ice on a frozen river or when fire from an exploding vehicle propagates across a grassy plain, because you assume that the scenery is static. But in this game, almost nothing is. 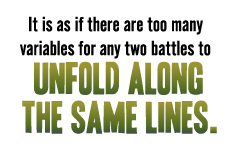 The grizzled Best Way producer introduced me to this high-concept realism by explaining how two different types of shells worked when fired from a tank. First, he showed me how to use armor-piercing shells to shoot straight through a building and cripple vehicles on the other side. High-explosive shells, meanwhile, explode on impact, flattening the building and reducing the amount of cover available to nearby infantry. (It goes without saying that all the scenery in Men of War is fully destructible.) This demonstrated one of the most important features of Best Way's games: direct, granular control over your army. At any point, you can take control of a single unit as if you're playing a third-person action game. You may have dozens of troops on the field at any one time, but you can always seize responsibility for their individual actions, deciding where a single machine-gunner will crawl and fire, or driving a tank through the side of a particular building.

This kind of obsessive focus on the gameplay implications of technical detail seems nerdy in the extreme, but when I played the full game a few months later, the results took me by surprise. The first thing you notice is that every individual soldier on the battlefield has his own inventory. There may be hundreds of infantrymen, but each one has his own distinct weapons, ammo, grenade, medkit and helmet. It seems almost gratuitous in its detail, until you find yourself out of ammo and pushed into a corner - you can loot the bodies of your fallen comrades to stay in the fight.

Later, I hooted with incredulity after picking up an anti-tank rifle and using it to turn the tide of an entire battle - not because such a scenario was unlikely, but simply because here was a real-time strategy game where such things were actually possible. I found myself stealing motorbikes, patching up tanks for one last stand, laying mines I found in crates and using stolen sniper rifles to decimate entrenched enemies. It is as if there are too many variables for any two battles to unfold along the same lines, no matter how carefully you might attempt to recreate a particular scene or skirmish.

Gallery of the Day: 8 RTS Games That Will Keep You Clicking DrStrangelove 12 Comments
Comments on