This deceptive complexity helped me understand Best Way's seemingly bland choice of title. Men of War sounds like it popped straight out a generic name generator, but in fact it's entirely appropriate. This is the rare RTS where the actions of individual men on the field truly matter, where the heroic deaths of these tiny heroes takes on a poignancy unheard of in any other strategy game, precisely because of what these little chaps are capable of. Left to their own devices, they will use cover, go prone and even attempt to lob anti-tank grenades at vehicles that get within range. But when you step into the shoes of an individual soldier, you gain both the ability to singlehandedly influence the tides of battle and an entirely new perspective on the action. 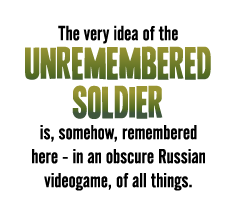 The second level of Men of War is more like a battlefield simulation than that of any classical RTS. Wave after wave of Germans attack a Russian compound in a battle you will eventually lose. You can't do much to avoid your fate, and you're left to watch your men bravely fight to death as you make little tweaks and adjustments here and there, occasionally taking control of a particular individual to perform vital tasks. The capacity of the game to throw radically different scenarios at the player is what makes it such fascinating terrain. Tiny skirmishes explode into full-scale battles in the duration of a single level. Villages are flattened in grueling, hour-long tank-engagements. Single men make the ultimate sacrifice to stave off defeat. It's spectacular stuff.

That's not to say it's perfect - it's not. It's too hard, and the voice acting is terrible. The A.I. pathfinding occasionally freaks out, and not all the vehicles work as they should. But sometimes the character and ambition of a game is enough to smudge the flaws away. After all, what other RTS can be rightfully called "heart-breaking"?

Just before writing this, I played a level of the brand-new expansion, Red Tide. My attempt to free a village from Nazi-aligned troops came down to a single machine-gunner who was able to flank and gun down a group of enemy cannoneers. After killing perhaps a dozen enemy crewmen, he was spotted by an enemy vehicle. I tried to run for cover, but a single bullet clipped him, knocking him to the ground. Wounded, he crawled into a ditch, only to be found by enemy soldiers as he desperately tried to patch himself up. They gunned him down. I sat up out of my chair screaming: "He's a tiny frickin' hero!"

In its own small way, Men of War is a testament to unsung acts of heroism. The very idea of the unremembered soldier is, somehow, remembered here - in an obscure Russian videogame, of all things. I salute it.

Jim Rossignol is an editor at RockPaperShotgun.com and the author of This Gaming Life, an account of the life of modern videogames and some of the people who play them.