In April of 2008, I went to Moscow to visit KRI, the games convention for the Commonwealth of Independent States (largely made up of those nations formerly attached to the Soviet Union). KRI attendees included a range of studios from across the region, from small student projects to the makers of large multi-format games that Russian mega-publisher 1C hoped would break into Western markets in 2009. The convention took place in the vast 1970s "Kosmos" hotel, which is a monument - among an entire district of space-monuments - to the attitude and architecture at the height of the Cold War. 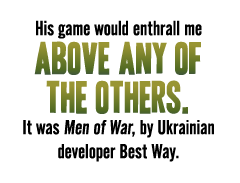 The 21st-century Kosmos foyer is now a kitsch hybrid of Vegas neon (Yuri Gagarin bar!) and black marble, while the rooms and corridors are wood-paneled like the innards of an old yacht. It was in one of these rooms that I met a producer for Best Way, a Ukrainian real-time strategy game developer. Grey and furrowed, he wore the face of million cigarettes. He greeted me with the exhausted look and brief, hard handshake of a man who had seen too much in his time. When we sat down to talk about his game, however, he came alive.

The Russian games scene is now as diverse as any in the world, and I'd already seen a 4X game, a God of War clone, a turn-based RPG/strategy title, a post-apocalyptic racing game, a survival-horror FPS, a fighting game and a flight sim. By the time I came to my haggard companion's presentation, I was no longer sure what to expect. But it was his game that would enthrall me above any of the others. It was Men of War, one of the numerous installments in the "of War" series produced by Ukrainian developer Best Way.

I had previously ignored Best Way's games, assuming they were too fiddly and hardcore for me to bother with. Everything I had read about their output left me with that "OK if you can put in the effort" residue that steers me away from many obscure niches of gaming. But after sitting through the studio's wizened spokesman's meticulous, energetic presentation - translated and mediated by a Russian woman who clearly had no idea how anyone could get excited about this kind of obscurity - it would not be something I ever ignored again. When it arrived in the U.K. in early 2009, I lost an entire week to it. Suddenly, the games took on a new significance.