When you're a kid, there's nothing quite like playing outside. From Kick the Can to afternoon sessions of make-believe in the park, outdoor play holds the unspoken promise of adventure. Free of the comforts and confines of the home, it's a blank canvas on which kids' imaginations are given life, where alleyways become dungeons and front porches become fairytale castles. 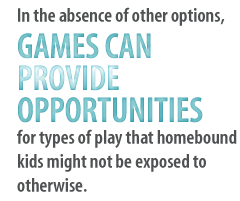 Yet most experts agree that children today spend less time outdoors and have fewer opportunities to engage in unsupervised outdoor play than ever before. After decades of latchkey kids, "stranger danger" and family unfriendly urban design, the "wilderness of childhood," as author Michael Chabon calls it, is disappearing. Given how significant outdoor play is to kids' health, wellbeing and development, many wonder what impact this is having and whether the quest to keep kids safe can sometimes do more harm than good.

One response to this phenomenon is the recent rallying cry around what some are calling the "free-range kids movement." Although the term itself comes from a book by syndicated columnist Lenore Skenazy, the ideas at the center of the movement describe a much broader attitudinal shift taking place among parents and other caregivers. A significant component of the free-range kids approach involves a rejection of the general state of fear that has gripped North Americans around the idea of letting kids venture out into "the public" unsupervised. In its place, the movement promotes giving children more freedom and autonomy, which includes reclaiming public spaces and opportunities for outdoor play.

Many parents see outdoor play and gaming at odds with one another in discussions of children's health and wellbeing. Even exer-games are occasionally criticized for keeping players indoors and in front of the screen. Nonetheless, there is a lot of overlap between gaming culture and the free-range kids movement. Above all, they both recognize the importance of play within children's lives and healthy development.

The celebration of play and the wilderness of childhood has been a cornerstone of game design since the 1980s. Shigeru Miyamoto often describes his games as inspired by a childhood of exploring the grassy hills and caves that sprinkled the countryside surrounding his hometown of Sonebe, Japan. His most successful and widely loved games capture much of the charm of childhood exploration, including the Super Mario Bros. and Legend of Zelda series. Miyamoto remains a big proponent of outdoor play, mentioning in interviews that his number one rule about his own kids' gaming is, "If it's nice, then go play outside."

In the absence of other options, games can even provide opportunities for types of play that homebound kids might not be exposed to otherwise. Henry Jenkins, USC professor and pop-culture critic extraordinaire, describes videogames as offering one of the only chances that many among the current generation of kids will likely ever have to experience the kind of "complete freedom of movement" he and his friends enjoyed as children in the '60s. Back then, kids could wander through the neighborhoods of suburban sprawl and find the little pockets of forest and vacant lots that would become their secret playgrounds. Today, kids are rarely allowed to wander anywhere, and there are very few secret places left for them to discover, let alone access at will.

Letters to the Editor: Healthy Living The Escapist Staff 0 Comments