As the gamer generation moves steadily away from traditional media, it's created some strange new currents in the flow of information. While thousands of eager bloggers and online writers pore over topics such as Diablo 3's color palette or who's winning the console war, other topics that seem more old-fashioned have fallen by the wayside. Health coverage may be one of them. 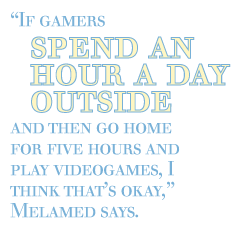 Three months ago, the online edition of the journal Pediatrics published a study that could have important implications for gamers' health and quality of life. Most gaming media did not report on it. Others lashed out at the study, even while their criticism suggested they either didn't read it or didn't understand it. The flawed coverage points out two troubling problems with new media: 1) Highly specialized websites don't provide the kind of general information that traditional media does, and 2) The speed and volume of online content production often means sources are not properly verified.

The study in question concerned a link between videogaming and vitamin D deficiency in American children and adolescents. "There was a very strong correlation between the number of hours that somebody - be that a child or adolescent - spent in front of a screen and vitamin D deficiency," says Dr. Michal Melamed, an Assistant Professor in the Departments of Medicine and of Epidemiology and Population Health at the Albert Einstein College of Medicine of Yeshiva University in New York City. A vitamin D research specialist, she led the five-person team whose paper, "Prevalence and Associations of 25-Hydroxyvitamin D Deficiency in US Children: NHANES 2001-2004," drew national attention from American news media (and The Colbert Report) upon its publication.

Melamed's study described vitamin D levels in Americans aged 1 to 21 by analyzing data from the nationally representative National Health and Nutrition Examination Survey (NHANES) obtained between 2001 and 2004 by the National Center for Health Statistics. In preparing the nine-page paper, Melamed and her team checked vitamin D levels in 6,275 children and adolescents surveyed for NHANES and looked for factors associated with low levels. They found nine percent of those surveyed (about 7.6 million children nationwide) had deficient vitamin D levels, while a further 61 percent (or 50.8 million nationwide) had insufficient levels. Among those more likely to have lower vitamin D levels were older children, girls, non-Hispanic blacks, Mexican Americans, Americans of other races, those born outside of the U.S., those from lower income families, obese children and those "who spent more time watching television, playing videogames, or using computers."

In a phone interview, Melamed explains playing videogames doesn't cause low vitamin D levels. It's the decreased time kids spend outdoors that does, since a primary source of vitamin D is sunlight. "If gamers spend an hour a day outside and then go home for five hours and play videogames, I think that's okay," she says. "I think we're more worried about the people who don't do the one hour of outdoor physical activity, but do the gaming without sun exposure."